20 December 2011
The head of the United Nations agency tasked with safeguarding the world’s cultural heritage has voiced concern over fresh violence in the Egyptian capital, Cairo, that left 10 people dead at the weekend and resulted in a fire at a historic research centre that destroyed about 70 per cent of a valuable collection of manuscripts.

“This is an irreversible loss to Egypt and to the world,” said Irina Bokova, the Director-General of the UN Educational, Scientific and Cultural Organization (UNESCO), in a statement issued yesterday, lamenting the fire damage at the Institute of Egypt.

“These manuscripts represent the history and identity of a people. I call for light to be shed on the causes of the fire, and for serious measures to be taken quickly to save what can be saved,” she said, praising the courage of fire fighters and volunteers who tried to put out the fire.

Ms. Bokova offered UNESCO’s assistance, including through its already mobilized office in Cairo, in helping to compile an accurate inventory of the damage and to put the salvaged manuscripts in a safe holding place.

“The loss of such irreplaceable sources of learning shows once again the fragility of this collective memory and reminds us that we must do everything to ensure that it is kept intact,” she said.

She called for vigilance against looting and the illicit trafficking of manuscripts, noting that cultural sites are particularly vulnerable in times of unrest.

“The manuscripts are an integral part of cultural heritage, which is the cornerstone of every society. This heritage is an irreplaceable source of identity and a driver of future development and cohesion. Destroying or neglecting this asset today diminishes the chances of building a strong democratic society tomorrow,” she added. Cairo has dozens of buildings and museums housing priceless cultural treasures.

The Institute of Egypt was established in 1798 by the French military and political leader Napoleon Bonaparte to advance scientific research. It is the oldest scientific institution in the country, and its library holds around 200,000 books, some extremely rare, about history, geography, technology and science.

The building that caught fire held a priceless first edition of the Description of Egypt, which contains the knowledge accumulated by academics about Bonaparte’s expedition. Part of the book was saved. 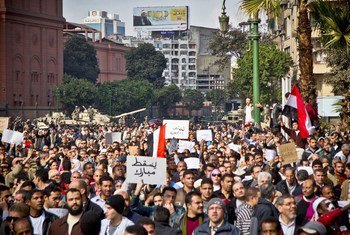 19 December 2011
The United Nations human rights chief today strongly condemned what she described as the “brutal suppression” of demonstrations by the military and security forces in the Egyptian capital, Cairo, saying the violence reportedly left at least 11 people dead and more than 500 others injured over the weekend.