The United Nations rights chief today added her voice to the chorus of UN officials welcoming the decision by Member States to adopt a new protocol aimed at protecting children from abuse and violence.

The Optional Protocol to the Convention on the Rights of the Child, adopted yesterday by the General Assembly, will encourage State parties to develop national mechanisms enabling children whose rights have been violated to access a system through which their voices and complaints can be heard.

“We see every day examples of a wide range of human rights violations against children – from discrimination to child trafficking to all forms of physical or mental violence,” said UN High Commissioner for Human Rights Navi Pillay, who encouraged States to sign the Optional Protocol giving child victims of abuse direct access to an international human rights complaint apparatus.

“Children will now be able to join the ranks of other rights-holders who are empowered to bring their complaints about human rights violations before an international body,” Ms. Pillay added.

The committee will then examine the complaint and may request that the State enforce interim measures preventing any further damage to the complainant.

Jean Zermatten, the Committee Chairperson, also celebrated the adoption of the protocol, noting that it took into consideration “the particular, special needs of children.”

Yesterday, Special Representative of the Secretary-General on Violence against Children Marta Santos Pais “wholeheartedly” welcomed the new measure, voicing the hope that it would help bring to an end “the invisibility and conspiracy of silence surrounding incidents of violence against children.”

The new protocol opens for signature in 2012 and will enter into force three months after it acquires ratifications or accessions from 10 countries. 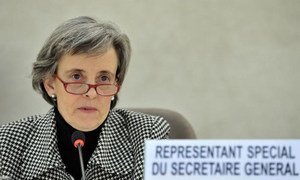 A United Nations envoy dealing with children’s rights today hailed the decision of Member States to adopt a new protocol aimed at protecting children from abuse and violence.