The United Nations refugee agency today launched a massive airlift of relief supplies from Kenya to neighbouring South Sudan where an estimated 50,000 Sudanese refugees are in need of assistance after fleeing conflict in their country.

The supplies were delivered to Malakal airport in South Sudan’s Upper Nile state, close to sites where the refugees have settled.

“These supplies are desperately needed,” said Vivian Tan, UNHCR spokesperson in Juba, South Sudan’s capital. “Families often arrive here exhausted, hungry, cold or sick. We have already distributed whatever we had on the ground, including aid from Juba and Malakal. Our local warehouse is almost empty now.”

The remaining 17 flights will deliver an additional 272 tons of relief supplies from UNHCR’s stockpiles in Nairobi to Malakal. The stocks will then be taken by road either to Maban county in Upper Nile, some 300 kilometres to the north-east, or westwards to Unity state. The airlift will cost an estimated $1.5 million, while the aid supplies being delivered are valued at $2.5 million.

In addition to airlifts, UNHCR plans to send 10,000 tents to South Sudan from a warehouse in Dubai in the coming weeks at an expected cost of more than $8 million.

Upper Nile and Unity states in South Sudan have been receiving refugees from fighting in Sudan’s Blue Nile and Southern Kordofan states in recent months.

“Many families left with few belongings and walked for weeks through the bush, stopping where there was water and moving on when the source ran dry,” said Ms. Tan. “Some were stranded in heavily-forested areas bordering South Sudan.”

At least 40,000 refugees have arrived in Upper Nile since September. UNHCR is aware of 25,000 refugees at the Doro camp, and an estimated 15,000 stranded in the Elfoj border area in Maban county. There are also reports of some 27,000 refugees scattered across the Guffa border area further north.

The agency has distributed relief supplies that were already in the country to more than 19,000 of the Sudanese refugees in Doro camp.

In Unity state, some 22,000 refugees from the Nuba Mountains area of Sudan’s Southern Kordofan state have fled to Yida settlement across the border since August. The makeshift site is located near the volatile frontier and has come under attack in the past, most recently in mid-November, according to UNHCR. 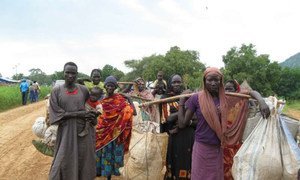 The United Nations refugee agency voiced concern today over the movement of large numbers of people from Sudan into Ethiopia and South Sudan, saying that an estimated 76,000 people have moved since August, mainly as a result of conflicts.