20 December 2011
The internationally stated goal of improving access to safe drinking water across the globe is likely to be achieved well ahead of the 2015 deadline, but large numbers of people in the world’s least developed regions will still not benefit, according to a United Nations report released today.

The internationally stated goal of improving access to safe drinking water across the globe is likely to be achieved well ahead of the 2015 deadline, but large numbers of people in the world’s least developed regions will still not benefit, according to a United Nations report released today.

Reducing by half the proportion of people without sustainable access to safe drinking water and basic sanitation by 2015 is one of the global targets under the internationally-agreed poverty and social development vision known as Millennium Development Goals (MDGs), which have a 2015 achievement deadline.

The new study by the UN Children’s Fund (UNICEF) and UN World Health Organization (WHO), entitled Drinking Water Equity, Safety and Sustainability, shows that between 1990 and 2008, the proportion of the world’s population with access to improved drinking water sources increased from 77 per cent to 87 per cent.

“The good news is that almost 1.8 billion more people now have access to drinking water compared to the start of the 1990s,” said Sanjay Wijesekera, UNICEF’s associate director and water and sanitation chief. “The bad news is that the poorest and most marginalized are being left behind.”

However, the report stresses, even though significant progress has been made, at the current rate, 672 million people will still not be using improved drinking water sources in 2015. There are still many countries in sub-Saharan Africa, Southern Asia, Eastern Asia and South-East Asia that are not on track to meet the target, according to the report.

In sub-Saharan Africa, for example, total access has significantly increased since 1990, jumping from 49 per cent to 60 per cent, and reaching an additional 126 million people in urban and 111 million in rural areas. However, population growth has outstripped the progress to the extent that the actual number of people without access was greater in 2008 than it was in 1990, according to the report.

The study also found that the richest 20 per cent in sub-Saharan African countries are more than twice as likely to use an improved drinking water source as the poorest 20 per cent. In addition, poor people in rural areas have the lowest access to safe drinking water, with the greatest burden in collecting water falling to women and girls.

Globally, more than eight in 10 people without improved drinking water sources live in rural areas. However, the proportion of the rural population in developing regions using piped drinking water on premises was still only 31 per cent in 2008, up from 21 per cent in 1990. In urban areas it went from 71 per cent to 73 per cent during the same period.

Water quality surveys showed that many improved drinking water sources such as piped supplies, boreholes and protected wells, do not conform to WHO guidelines. On average, half of all protected dug wells may be contaminated, along with a third of protected springs and boreholes. 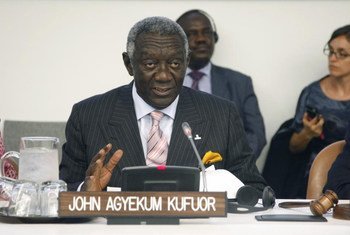 16 November 2011
The former Ghanaian president John Agyekum Kufuor will head the United Nations-backed partnership known as Sanitation and Water for All, which works to achieve universal and sustainable access to decent sanitation and drinking water.