UN Photo/David Ohana
A mother and her child at a UN-supported paediatric hospital in the Democratic People’s Republic of Korea.
19 December 2011

In a resolution adopted by the General Assembly, Member States urged authorities in the DPRK to fully respect human rights and fundamental freedoms, to ensure complete access to humanitarian aid and to improve cooperation with the UN so the world body can help improve the living conditions of the civilian population.

The resolution – which obtained 123 votes in favour and 16 against, with 51 abstentions – voiced concern at reports of violations of civil, political, economic, social and cultural rights.

It cited acts of torture and other forms of “cruel, inhuman or degrading treatment or punishment,” such as public executions and extrajudicial detention; the death penalty being imposed for political and religious reasons; the absence of an independent judiciary and other elements needed for the rule of law; and the existence of a large number of prison camps.

Member States noted the limitations “imposed on every person who wishes to move freely within the country and travel abroad,” with people or their families punished if they leave, try to leave the country or are returned.

The resolution also detailed the situation facing refugees and asylum-seekers who have either been expelled or returned to the DPRK; the trafficking of women for prostitution or forced marriage; forced abortions; and “all-pervasive and severe restrictions” on the right to privacy and on freedoms of thought, conscience, religion, opinion and expression, peaceful assembly and association.

In the text, Member States reiterated their concern at unresolved questions relating to abductions in the form of enforced disappearance, and called on the Government in Pyongyang to urgently resolve these questions in a transparent manner.

The General Assembly also expressed deep concern at the humanitarian situation, saying there had been “a serious deterioration in the availability of and access to food” as a result of frequent natural disasters and structural weaknesses in agricultural production.

This had led, the resolution noted, to significant food shortages, as well as the prevalence of chronic and acute malnutrition, particularly among pregnant women, infants and the elderly.

The resolution calls on DPRK’s authorities to immediately end the human rights violations and to ensure that those responsible for the breaches are brought to justice before an independent judiciary.

It also ass Pyongyang to cooperate with the UN International Labour Organization (ILO) “with a view to significantly improving workers’ rights,” to reinforce existing cooperate with UN aid agencies, to improve cooperation with UN development agencies and to also work closely with the UN High Commissioner for Human Rights Navi Pillay and her office.

Member States also stressed the need to tackle the root causes of refugee outflows and to prosecute those who exploit refugees through human smuggling, trafficking and extortion, while not criminalizing the victims.

The resolution also strongly urged the authorities to fully cooperate with Marzuki Darusman, the Special Rapporteur on the situation of human rights in the DPRK, including by allowing him to make unimpeded visits. Currently the Government refuses to recognize his mandate. 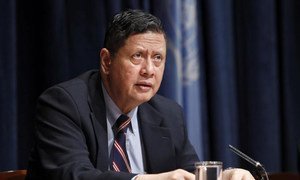 An independent United Nations expert today urged the Democratic People's Republic of Korea (DPRK) to begin carrying out steps to end human rights violations in the country, including overhauling the prison system and detention policies.