An independent United Nations human rights expert has urged authorities in Israel and the occupied Palestinian territory to lift restrictions to freedom of expression, stressing that these are curbing minority views and dissenting opinions, and preventing journalists and human rights defenders from reporting on rights violations.

“Freedom of expression does not only include expression of views that are widely accepted by the majority of the population or reflect the government’s policies, but also minority views and dissenting opinions,” he said.

Mr. La Rue visited Gaza, the West Bank, East Jerusalem and Israel as part of a 12-day fact-finding mission, becoming the first independent UN expert charged with monitoring and reporting on the right to freedom of opinion and expression to make an official visit to the region.

Mr. La Rue expressed his concern with the current situation regarding journalists and human rights defenders in the region, who he said are being prevented from carrying out their work.

“In Gaza, I was informed of the trend of arbitrary arrests and overnight detention of journalists and human rights defenders by the security agencies of the de facto authorities, which has an intimidating effect and leads to self-censorship,” he said, calling on authorities to facilitate their freedom of movement.

In Israel, Mr. La Rue expressed his concern about the Government’s post of chief censor, who decides whether information gathered by journalists poses a threat to State security and if it can be published in the media. Mr. La Rue stressed that while every country has the right to keep certain information confidential from the public to protect its national security, a body for the prior censorship of the press should not exist in any country.

In addition, Mr. La Rue urged Israeli authorities to guarantee the right to freedom of expression to Palestinian Arab citizens of Israel, who make up about 20 per cent of the population, and Arab members of the Knesset, the country’s Parliament.

Mr. La Rue, who serves in an independent and unpaid capacity, will present his full findings and recommendations in a report to the UN Human Rights Council in Geneva in June next year. 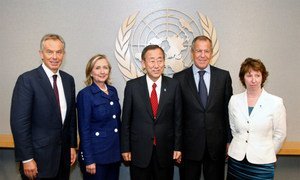 The United Nations and its diplomatic partners in the search for Middle East peace today underlined their appeal to Israel and the Palestinians to create an atmosphere conducive to the resumption of stalled peace talks and urged both parties to refrain from provocative actions.