Fiscal austerity policies being implemented by countries are driving the global economy towards a recession, the United Nations trade and development body warned today, stressing that greater attention should be paid to high unemployment, which it called a more pressing problem than budgetary deficits.

“The vicious circle induced by fiscal contraction, weak financial institutions and financially fragile households is fuelling a crisis of confidence and holding back investment and job creation in the private and public sectors simultaneously,” the UN Conference on Trade and Development said in a policy brief published today.

“The countries threatened by recession and deflation should avoid intensified austerity measures because these are unlikely to produce the intended outcomes and could propel the world into a renewed bout of recession, or even into an outright depression,” UNCTAD cautioned.

The economic contraction will affect emerging and developing economies alike, it warned, stressing the need to prepare contingency plans.

“Unless there is a rapid policy turnaround, the world is in danger of repeating the mistakes of the 1930s,” the agency added.

The Group of 20 (G20) major economies initially seemed to recognize the threat of fiscal austerity to the global economy, but recent actions have not been consistent with that recognition, according to UNCTAD.

“In particular, the fiscal restraint in the countries with current account surpluses and very low long-run interest rates in Europe, point precisely in the wrong direction. A fragile global economy has a significant interest in the implementation of expansionary, rather than contractionary, fiscal policies in key economies,” the brief stated.

“Only the former can open a path towards lower fiscal deficits and falling public debt ratios. A ‘lost decade’ for the world economy would risk the development gains achieved during the recent years, and throw into question the ability of democratic governments to tackle the most urgent challenges of our age,” it added.

Trends revealed by the publication include volatile prices for commodities since the beginning of this century and long-term economic gains by several developing countries between 1981 and 2010.

Countries in the European Union saw a decline in services export share of eight percentage points for the period.

Those statistics provide evidence of the growing prominence of developing economies in the global economy.

The price of rice, the most important staple food for a large part of the world’s population, showed the sharpest increases between 2001 and 2010, climbing by an average of 15 per cent per year. 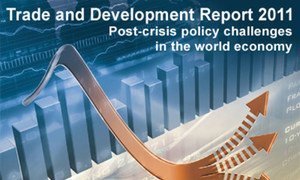 Economic recovery in developed economies may grind to a halt because of weak domestic demand and the replacement of stimulus packages with fiscal austerity measures as governments try to regain the confidence of the financial markets, according to a United Nations report unveiled today.