United Nations Member States today called on Syrian authorities to immediately implement the plan of action proposed by the League of Arab States to resolve the crisis that has engulfed the country since a public uprising began near the start of the year.

In a resolution adopted by the General Assembly, Member States said the plan of action – which includes allowing observers into the Middle East country – should be implemented “in its entirety.”

The resolution – passed with 133 votes in favour, 11 against, and 43 abstentions – also calls on Syrian authorities to cooperate fully with the independent international commission of inquiry founded by the UN Human Rights Council.

More than 5,000 people have now died since the uprising in Syria began in March, according to UN High Commissioner for Human Rights Navi Pillay, who has repeatedly urged the country’s authorities to stop the deadly crackdown by security forces against protesters.

Today’s resolution “strongly condemns the continued grave and systematic human rights violations by the Syrian authorities,” citing such examples of arbitrary executions, enforced disappearances, torture of detainees and the persecution of protesters and human rights defenders.

The resolution also demands an immediate end to the human rights violations and calls on Syrian authorities to comply with their obligations under international human rights law to protect their population.

The uprising in Syria is part of a broader popular protest movement that has gripped North Africa and the Middle East this year and led to the toppling of long-term regimes in Egypt, Libya, Tunisia and Yemen. 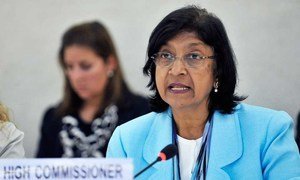 More than 5,000 people have now died since the start of the public uprising in Syria, the United Nations human rights chief said today, sounding the alarm that a crackdown and fresh eruption of violence could be imminent in one of the country’s key cities.