Turkey’s role in humanitarian affairs is rapidly growing and has become vital for the international community, the United Nations relief chief said today, calling for stronger partnerships between the country and international organizations to provide assistance to people who have been affected by emergencies around the world.

“The Government and people of Turkey play an important role in international humanitarian affairs,” said Under-Secretary-General and Emergency Relief Coordinator Valerie Amos during her one-day mission to Turkey.

“In addition to contributing generously to crises in Somalia, Libya, Afghanistan, Pakistan, and elsewhere around the world, Turkey also engages actively in other key humanitarian response mechanisms such as the International Search and Rescue Advisory Group (INSARAG),” she said.

During her visit, Ms. Amos met with various Turkish officials to discuss ways of strengthening the country’s collaboration with the Office for the Coordination of Humanitarian Affairs (OCHA) and Turkish organizations, as well as the humanitarian situation in the Horn of Africa.

“OCHA values the role Turkey has played this year in response to the needs of people escaping violence in Syria and Libya,” Ms. Amos said. “I thank the people and the Government of Turkey for their generosity and solidarity with those in need of assistance in the region and across the world.”

Ms. Amos also held talks with Turkish development and relief officials such as Serdar Cam, President of the Turkish International Cooperation and Development Agency, and Ejder Kaya, Acting Director-General of the Disaster and Emergency Management Presidency, and discussed their work in the humanitarian response in Somalia and Sudan.

“Turkey is playing an ever greater role in the international community,” said Ms. Amos. “It is vital that we build effective partnerships together if the United Nations and other organizations are going to rise to the challenge of meeting the needs of an increasing number of people affected by emergencies around the world.” 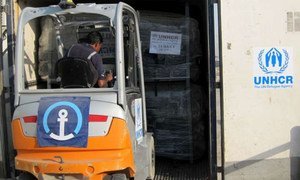 The United Nations humanitarian fund announced today that it is allocating $3.4 million to provide shelter, education, health care and psychological support to thousands of people affected by the recent deadly earthquakes in south-eastern Turkey.