16 December 2011
Disparities in the well-being of children and women persist in Viet Nam, according to the findings of a United Nations-backed survey released today, which also shows that the differences vary across regions by gender, area of residence, wealth, and ethnicity.

On immunization, the finding of the multiple indicator cluster survey – carried out by Viet Nam’s General Statistics Office in partnership with government ministries, the UN Children’s Fund (UNICEF) and the UN Population Fund (UNFPA) – shows just two in five children between the ages of 12 and 23 months are fully immunized.

There is also a considerable gap between rural and urban areas, with one in two urban children fully immunised, compared to only one in three in rural areas.

While the report shows that nearly one in every four children under the age of five in Viet Nam is stunted – shorter than he or she should be for his or her age – it found that the stunting rate among ethnic minority children is twice as high compared to their Kinh or Hoa peers.

Similar results were seen in the area of women’s reproductive health. Most women aged between 15 and 49 who gave birth in the two years preceding the survey received antenatal care at least once by skilled personnel, and two thirds had the recommended four antenatal care visits.

Nine out of 10 deliveries took place in health facilities, but significant disparities emerge by ethnicity. Virtually all women in Kinh or Hoa households delivered in a health facility compared to three out of five women from ethnic minority households.

“The report provides evidence that ethnic minorities are not faring well in most surveyed areas,” said Lotta Sylwander, UNICEF’s representative in Viet Nam. “The data generated… [in the survey] will allow policy-makers to target their resources to those population groups that are in most need of attention and should be the focus of collective development efforts.

“This would allow the benefits of Viet Nam’s economic growth to reach women and children in all ethnic, economic and social groups,” she said.

The report also shows that about a third of women who received antenatal care during their last pregnancy were tested for HIV. Significant disparities emerged by area of residence, with women living in urban areas twice as likely to have been tested compared to women living in rural areas.

The survey is an initiative which UNICEF has used since the mid-1990s to assist countries to collect and analyse data to monitor conditions for children and women. 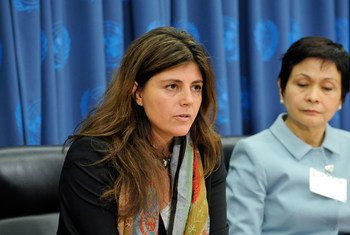 31 August 2010
While Viet Nam has made considerable strides in curbing poverty in the past 20 years, efforts must be ramped up to ensure that no one is left behind as the Asian nation continues its economic growth, a United Nations independent human rights expert said today.