UNHCR/B. Bannon
A displaced woman with two children after fleeing their home in southern Somalia.

16 December 2011
An independent United Nations human rights expert today called for greater efforts to improve the plight of women in Somalia, thousands of whom remain extremely vulnerable to discrimination and violence.

“While I support the Government’s tentative efforts to address the issues of violence against women, I note that there still are many challenges for the full and effective participation of women in the political process,” said Rashida Manjoo, the Special Rapporteur on violence against women.

“Violence against women is a manifestation of inequality and discrimination which cannot be addressed in isolation of the historical and current context.”

During her eight-day mission, Ms. Manjoo met with UN and international agencies based in Nairobi, and then travelled to Garowe in Puntland and Mogadishu, the Somali capital, to meet with Government officials and representatives of the African Union peacekeeping mission (AMISOM) and civil society.

She also visited camps for internally displaced persons (IDPs) and police stations, and talked with individual victims of gender-based violence.

Ms. Manjoo noted the lack of substantive reporting of violence against women and girls, and the absence of proper statistics and data, by the authorities, international agencies and civil society.

“The absence of accountability mechanisms and specialized services for women and girl victims of various forms of violence, also contributes to such invisibility and silencing.”

Somalia is also not immune to the problem of domestic violence, the most pervasive form of violence against women, the expert said, adding that the problem is exacerbated by the internal conflict, the displacement of populations and non-functioning State authorities.

Ms. Manjoo stressed that Somalia currently has an opportunity to promote human rights for all, and to place the issue of violence against women on the national agenda.

“I call on all stakeholders to take on the responsibility to make this a reality,” stated the expert, who reports in an independent and unpaid capacity to the UN Human Rights Council in Geneva. Her full report on Somalia will be submitted to the Council next June. 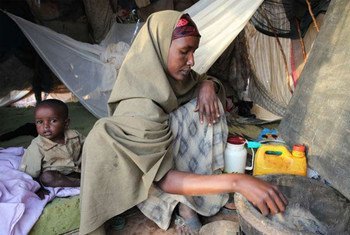 11 August 2011
The United Nations official leading the fight against sexual violence in times of conflict today voiced concern over reports that women and girls fleeing famine in Somalia were being raped or abducted and forced into marriage by bandits and other armed groups as they tried to reach refugee camps in Kenya.