Pledges to the UN refugee agency assist with water distribution at the Ifo extension camp in Dadaab, Kenya
15 December 2011

An additional $122 million was pledged for 2013 and beyond, according to a news release issued by the UN High Commissioner for Refugees (UNHCR), whose total budget requirements for the next two years are $3.59 billion and $3.42 billion, respectively.

“This funding is vital for our work in ensuring the protection and well-being of millions of individual refugees, asylum-seekers, internally displaced and stateless people,” High Commissioner António Guterres said, thanking donors for their support.

“Given the pressure that donors face in the current uncertain economic environment, we are particularly gratified to see this level of support.”

The 2012 budget is $260 million lower than this year’s budget, which had to be revised upwards during the course of 2011 because of a succession of crises such as those in Côte d’Ivoire, Libya, the Horn of Africa, Sudan, and the floods in Pakistan.

As in previous years, the agency’s global refugee programme remains the largest component of its requirements – amounting to $2.7 billion of the $3.59 billion needed for 2012. Almost half of the $2.7 billion is for operations in Africa.

Projects for internally displaced persons (IDPs) amount to $575.7 million while global reintegration activities total $246.4 million. Programmes such as combating HIV/AIDS, water and sanitation, green energy projects, together with headquarters and regional support will require $329 million in 2012.

The 2012 budget also includes $268 million for operational reserves, intended for new emergencies and other unforeseen needs.

There are more than 43.7 million forcibly displaced people and an estimated 12 million stateless around the world. Nearly 34 million of them receive protection and assistance from UNHCR.

Sub-Saharan Africa remains the largest recipient of UNHCR assistance, accounting for 45.6 per cent of the total needs in 2012, followed by 15.7 per cent for the Middle East and North Africa and 14 per cent for Asia and the Pacific.

The annual pledging conference is an occasion for UNHCR to ask donors to support its work, which is almost entirely funded by voluntary contributions, mostly from governments. 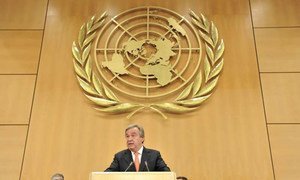 The United Nations refugee chief today called on the international community to assume its shared duty to protect and assist millions of forcibly displaced and stateless people around the world, as he opened the largest-ever conference on the issue in Geneva.