14 December 2011
The Security Council today extended the mandate of a United Nations panel of experts monitoring compliance with sanctions imposed on Liberia in connection with the country’s civil war, noting a lack of progress in the implementation of financial measures stipulated in the sanctions regime.

The Panel of Experts was appointed by Secretary-General Ban Ki-moon in July 2007 to renew investigations on whether the sanctions were being enforced in the light of allegations that former president Charles Taylor still had access to considerable wealth in the country.

In today’s resolution, the Council decided to extend the mandate of the panel for a period of 12 months.

The panel will conduct two follow-up assessment missions to Liberia and neighbouring States to investigate and compile a mid-term and a final report on the implementation and any violations of the sanctions measures on arms.

It will also assess the impact, effectiveness and continued need for the sanctions measures related to Mr. Taylor’s assets. The panel will identify and make recommendations on areas where Liberia’s capacity and States in the region can be strengthened to facilitate the implementation of the sanctions.

The Council also authorized the panel – within the context of Liberia’s evolving legal framework – to assess the extent to which forests and other natural resources are contributing to peace, security and development instead of instability.

The panel will also look into how the relevant legislation and other reform efforts are contributing to the transition, and provide recommendations on how Liberia’s natural resources could better contribute to the country’s progress towards sustainable peace and stability.

The UN body asked the panel to cooperate actively with the Kimberley Process Certification Scheme – an international initiative of governments, industry and civil society to stem the flow of conflict diamonds – and to assess the Liberian Government’s compliance with the certification scheme.

It required the panel to provide a mid-term report to the Council through the Liberia sanctions committee by 1 June next year and a final report by 1 December 2012.

The Council requested the panel to cooperate actively with other relevant panels of experts, in particular similar panels on Côte d’Ivoire and the Democratic Republic of the Congo (DRC).

The panel was also required to assist the sanctions committee in updating the publicly available reasons for listing for entries on the travel ban and assets freeze lists, according to the resolution.

The Council requested the Secretary-General to reappoint the panel of experts and to make the necessary financial and security arrangements to support its work.

Meanwhile, the Council also heard briefings from four chairs of its committees, including Ambassador Nawaf Salam on the situation in Liberia, and Maria Luisa Ribeiro Viotti of Brazil, who chairs the sanctions committees on the DRC and Côte d’Ivoire.

It also heard from Ambassador Noël Nelson Messone of Gabon on Lebanon, while Ivan Barbalic of Bosnia and Herzegovina briefed on the Informal Working Group on Documentation and Other Procedural Questions of the Security Council. 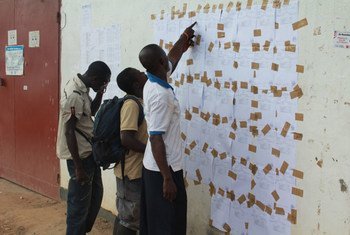 18 November 2011
The Security Council today commended the people of Liberia for holding a free, fair and transparent presidential election earlier this month, and encouraged them to work together to promote lasting peace and stability.