ECCC/M. Peters
Ieng Thirith appears before the Extraordinary Chambers in the Courts of Cambodia in October 2011 on her fitness to stand trial.

14 December 2011
The United Nations-backed genocide tribunal in Cambodia ruled today that Ieng Thirith, a 79-year-old former senior member of the Khmer Rouge who was found unfit to stand trial, will not be released as ordered last month but remain in detention.

On 17 November, the trial chamber of the Extraordinary Chambers in the Courts of Cambodia (ECCC) said it found that Ms. Thirith suffers from “a progressive, degenerative condition.” It ordered her unconditional release and that the proceedings against her be stayed.

However, the tribunal’s Supreme Court chamber today granted an appeal from the prosecution and set aside the release order, adding that the trial chamber must exhaust all available measures

potentially capable of helping the accused to become fit to stand trial.

“Such decision was adopted in the light of the possibility, albeit slight, of a meaningful improvement in the mental health of the accused which was foreseen by the medical experts appointed by the trial chamber,” stated a news release issued by the ECCC.

In a situation where the stay of proceedings may be lifted, the Supreme Court chamber found that unconditional release of an accused is not required. It concluded that the original ground for keeping the accused in provisional detention, namely to ensure her presence during the proceedings, remains valid and relevant.

Four expert psychiatrists who examined Ms. Thirith in September diagnosed her with clinical dementia, most likely Alzheimer’s, which would hinder her participation in court hearings.

The Supreme Court chamber today directed the trial chamber to request additional treatment for the accused “which may help improve her mental health to such extent that she becomes fit to stand trial.” Such treatment is to be carried out in a hospital or other appropriate facility in Cambodia.

Six months after the start of this treatment, the accused shall undergo a medial, psychiatric and/or psychological expert examination, after which the trial chamber shall determine her fitness to stand trial without delay.

Ms. Thirith, former Social Affairs Minister for the Democratic Kampuchea, was on trial for genocide and other crimes against humanity along with her husband and former foreign minister Ieng Sary, former so-called Brother Number Two Nuon Chea, and former head of State Khieu Samphan, all leaders of the Khmer Rouge regime during the late 1970s.

The ECCC is tasked with trying those deemed most responsible for crimes committed under the Khmer Rouge. It is an independent court set up under an agreement signed in 2003 by the UN and the Government, and uses a mixture of Cambodian staff and judges and foreign personnel. 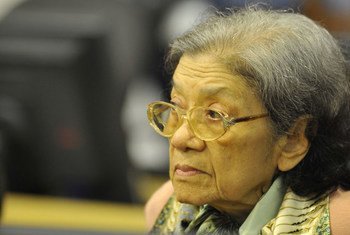 17 November 2011
The United Nations-backed genocide tribunal in Cambodia ruled today that a 79-year-old former senior member of the Khmer Rouge is unfit to stand trial and ordered her unconditional release.