UN needed more than ever after ‘remarkable and extraordinary year’ – Ban

The UN has “never been so needed” to deal with the planet’s most pressing challenges, from climate change to human rights to helping people facing humanitarian crises, Secretary-General Ban Ki-moon said today.

The United Nations has “never been so needed” to deal with the planet’s most pressing challenges, from the impact of climate change to growing demands for human rights to helping people facing humanitarian crises, Secretary-General Ban Ki-moon told a year-end press conference today.

“This has been an extraordinary and remarkable year,” Mr. Ban told journalists at UN Headquarters in New York, citing the so-called Arab Spring, the birth of South Sudan as a new nation and UN Member State, and promising political developments in Myanmar as examples.

“I believe we are at an inflection point in history. All is changing. The old rules are breaking down. We do not know what new order will emerge. Yet we can be confident: the United Nations will be at the fore.”

Mr. Ban, who completes his first term as Secretary-General on 31 December, said that since he became the UN chief in January 2007 he has “sought to advance a practical, action-oriented vision of the UN as the voice of the voiceless and the defender of the defenceless.”

He said the UN spoke out “early and forcefully” as the Arab Spring unfolded across the Middle East and North Africa, “calling on leaders to hear the voices of their people.”

The Organization “played an essential role in the liberation of Libya. We stand ready to continue to help Tunisia and Egypt at their request. The agreement mediated by our UN envoy in Yemen sets the stage for an end to fighting – and the creation of a new government of national unity.”

The Secretary-General noted that events in hotspots worldwide “continue to test our resolve” and demand a concerted, united response from the international community.

“In Syria, more than 5,000 people are dead. This cannot go on. In the name of humanity, it is time for the international community to act,” he said.

“In Afghanistan, we face continued insecurity. Last week’s conference in Bonn re-affirmed the international community’s commitment to our partnership through 2014 and beyond. With the help of the [Middle East diplomatic] Quartet, we must continue to push for peace between Israel and Palestine. In the Horn of Africa, people still face famine.”

But he stressed that the UN had helped ensure substantial progress on several fronts, including at the recent climate change talks in Durban, South Africa, and in advancing the principle of “responsibility to protect.”

“In Côte d’Ivoire, [former president] Laurent Gbagbo sought to subvert the will of his people. We stood firm for democracy – and today he is in The Hague. We stood, as well, against Muammar al-Qadhafi when he vowed to slaughter his people like ‘rats.’

“These are important victories for justice and international law. During the last five years, we have stood repeatedly for accountability against impunity. We have strengthened the rule of law and the International Criminal Court (ICC), now ratified by 120 nations with more soon to come.”

Mr. Ban – who will next month outline a plan of action for his second term in office – also noted that an increased UN emphasis on preventive diplomacy and mediation has “produced encouraging results,” in countries as diverse as Sierra Leone, Kyrgyzstan, Cyprus, Nepal and Guinea.

In addition, he cited a strengthened UN commitment to the rights of women and children, ongoing efforts to promote UN reform and preparations for the landmark conference on sustainable development to be held in Rio de Janeiro, Brazil, in June next year. 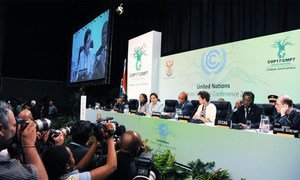 Secretary-General Ban Ki-moon welcomed today the set of decisions reached by countries at the United Nations Climate Change Conference in Durban, South Africa, saying they represent a significant agreement that will define how the international community will address climate change in the coming years.