More than 5,000 people have now died since the start of the public uprising in Syria, the United Nations human rights chief said today, sounding the alarm that a crackdown and fresh eruption of violence could be imminent in one of the country’s key cities.

Navi Pillay, the UN High Commissioner for Human Rights, said “many voices are warning that a major assault” on Homs – already the scene of frequent clashes between security forces and protesters this year – is about to begin, with a military build-up reported.

“I am not in a position to confirm those reports, but the prospect of such an attack is extremely alarming,” she said after briefing Security Council members in a closed-door session on the latest developments in Syria.

Ms. Pillay’s office (OHCHR) has received reports that hundreds of tanks and weapons have been deployed over the past few days, dozens of checkpoints have been set up and numerous trenches have been dug.

While OHCHR is unable to verify those reports because it has not been allowed access, it has seen video footage showing corpses on the streets, buildings riddled with bullets and tanks in residential streets.

Ms. Pillay said the overall death toll in the Syrian clashes “probably exceeds 5,000,” based on what she said were credible reports from a series of sources. The toll includes at least 300 children.

“This number includes civilians, as well as defecting soldiers and those executed for refusing to shoot civilians,” but does not include serving members of the military, security forces or allied armed groups. Hundreds of people from that category are also thought to have been killed.

“I am appalled by the constant stream of grave violations that have taken place since the first protests in Syria in March. I am concerned that this continued ruthless repression and deliberate stirring of sectarian tensions, especially in Homs, may soon plunge Syria into civil war.”

The High Commissioner said the Syrian Government “has manifestly ignored the pleas and condemnations of the international community at all levels.”

Speaking to reporters after the Council briefing, she reiterated her earlier calls for the situation inside Syria to be referred to the International Criminal Court (ICC), saying the “widespread and systematic nature” of killings, detentions and acts of torture constituted crimes against humanity.

She also noted the “huge numbers” of people kept in detention centres across Syria.

The uprising in Syria is part of a broader popular protest movement that has engulfed North Africa and the Middle East this year and led to the toppling of long-term regimes in Egypt, Libya, Tunisia and Yemen. 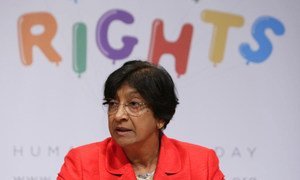 The United Nations human rights chief warned today that Syria could descend into civil war as more members of the armed forces defect, noting that nearly 1,000 of the estimated 4,000 people who have died in the bloody crackdown on protesters have been members of the security forces.