Amid counting in Côte d’Ivoire, Ban calls on political parties to remain calm

Basile Zoma/UNOCI
A voter participates in the first legislative election in Côte d’Ivoire with the presence of international observers.
12 December 2011

Secretary-General Ban Ki-moon today called on Ivorian political parties and candidates to continue to act peacefully as counting gets under way in polls to elect the 225 members of their country’s National Assembly.

Voting took place yesterday in the country’s first legislative elections since the protracted crisis that followed the incumbent Laurent Gbagbo’s refusal to stand down after he lost the United Nations-certified presidential election to Alassane Ouattara at the end of last year.

Mr. Gbagbo was later captured by security forces and has since been transported to The Hague to face trial at the International Criminal Court (ICC) on charges of crimes against humanity for his role in the post-election violence.

In a statement issued today by his spokesperson, Mr. Ban said the election marked “an important step towards the full restoration of constitutional order in Côte d’Ivoire, and should contribute to national reconciliation in the country.”

He also commended the Ivorian Independent Electoral Commission, known as IEC, and its national and international partners for their efforts in organizing and conducting the polls.

IEC, along with staff from the UN Office of Project Support Services (UNOPS) and the UN Development Programme (UNDP), are transmitting the tally sheets from polling stations to about 300 local electoral commissions, where they will be compiled and published.

In the statement, Mr. Ban “calls on the people of Côte d’Ivoire and all parties and candidates to preserve the existing peaceful atmosphere as the tallying of votes is under way, and to resolve any disputes through the established legal channels.”

Bert Koenders, the Secretary-General’s Special Representative for Côte d’Ivoire and head of the UN peacekeeping mission in the West African country (UNOCI), described the voting process yesterday as generally calm and positive.

“This calm could be illustrative of a positive development after the violent post-election crisis,” he said in Abidjan.

Mr. Koenders noted there had been some security incidents, such as in the Bouaflé area, where armed individuals stole ballot boxes and other electoral materials.

He called on the IEC to publish partial results for each constituency “within a reasonable time frame and as they become available.”

Mr. Koenders is mandated to certify the election results, and he stressed that the process will be carried out on the basis of five criteria agreed upon by all the Ivorian parties and by the Security Council – peace and security, inclusiveness, State media, the voters’ list, and the results. 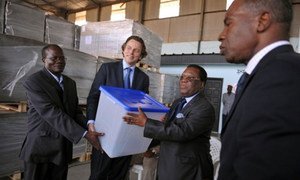 Voting for the parliamentary elections in Côte d'Ivoire today is occurring “smoothly in a positive and calm atmosphere,” said the United Nations envoy in the country, who has been touring polling stations in Abidjan.