Voting for the parliamentary elections in Côte d'Ivoire today is occurring “smoothly in a positive and calm atmosphere,” said the United Nations envoy in the country, who has been touring polling stations in Abidjan.

Mr. Koenders insisted that it was still premature to make an assessment at this stage, but said he was impressed by the work of the Independent Electoral Commission (IEC), as well as the discreet presence of the security forces.

When asked about the inclusiveness of the polls, Mr. Koenders spotlighted the presence of various political groups. “There are many candidates from different parties and many independent candidates.”

The Chief of the African Union Observer Mission, Seini Oumarou, described the organization of the polls as “impeccable” and expressed his hope for a high turnout.

“[Participation] will not be as high as during the presidential election, but the low turnout which we saw in the beginning is gradually increasing,” he said, welcoming UNOCI's work on the ground. “UNOCI has done an excellent job,” he added.

Parliamentary elections are taking place almost a year after Alassane Ouattara won a disputed presidential run-off election that led to months of deadly violence when the runner-up and incumbent Laurent Gbagbo refused to step down. 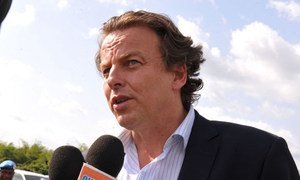 With just two days to go before parliamentary polls take place in Côte d’Ivoire, the United Nations envoy there called for “a peaceful and calm election,” adding that violence will not be tolerated.