Secretary-General Ban Ki-moon has appointed György Busztin of Hungary as his Deputy Special Representative for Iraq focusing on political, electoral and constitutional support.

Secretary-General Ban Ki-moon has appointed György Busztin of Hungary as his Deputy Special Representative for Iraq focusing on political, electoral and constitutional support.

He succeeds Jerzy Skuratowicz of Poland, who served with the UN Assistance Mission for Iraq (UNAMI) for two years. The Secretary-General thanked Mr. Skuratowicz for his dedicated service and commitment to the people of Iraq.

Mr. Busztin brings to the position a wealth of experience in diplomatic and international affairs, having served in various capacities in the region, including most recently as Hungary’s ambassador to Iran as well as serving in Afghanistan, Libya, Egypt, and Indonesia.

He was born in 1955 and has a PhD in Arabic Language and Semitic Philology from Loran Eotvos University in Budapest. He speaks six languages in addition to his native Hungarian – English, French, Arabic, Farsi/Dari, Malay, and Russian.

Headed by Special Representative Martin Kobler, UNAMI is tasked with assisting the Iraqi Government in the areas of elections, reconciliation, the resolution of disputed boundaries, human rights and humanitarian concerns, as well as reconstruction and development. 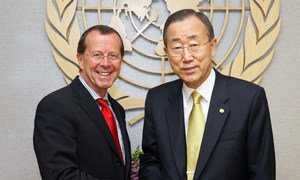 Secretary-General Ban Ki-moon today announced his intention to appoint Martin Kobler of Germany as his Special Representative for Iraq and head of the United Nations Assistance Mission to the country (UNAMI).