The loss of mountain forests sparked by increasing temperatures and population growth would have serious socio-economic and environmental consequences, the United Nations Food and Agriculture Organization (FAO) warned today, calling on governments to increase their efforts to protect them and incorporate them into their climate change policies.

“Mountain forests protect local communities against natural disasters and they safeguard the natural resources and environmental services that billions of people rely on for their well-being and livelihoods,” said Eduardo Rojas-Briales, FAO’s Assistant Director General for Forestry.

According to the latest report produced jointly by FAO and the Swiss Agency for Development and Cooperation, mountain forests have a great influence on the quantity and quality of water supplies. About 60 per cent of the world’s freshwater resources come from mountains, even though they only cover 12 per cent of the Earth’s surface.

“When forests are removed from mountains, soil erodes more quickly, deteriorating the water quality in streams and rivers,” the report reads, adding that many cities depend heavily on mountain water.

Some 95 per cent of Vienna’s water comes from the mountain forests of the Northern Alps, while 40 per cent of the water for Tegucigalpa, Honduras, comes from the cloud forests of La Tigra National Park. In Kenya, water from Mount Kenya generates 97 per cent of that country’s hydroelectric power. In Asia, the Tibetan plateau acts as a water tower for about three billion people.

In addition to being important freshwater sources, mountain forests also play an important role on climate change as they store large quantities of carbon. The loss of mountain forests would release this carbon into the atmosphere, having a negative impact on the environment.

The report, which was produced ahead of International Mountain Day on Sunday, calls on national policy-makers to “take into account the importance of protecting and conserving mountain forests and integrating them into policies aimed at mitigating and adapting to climate change.”

It also stresses their importance at an international policy level to achieve sustainable development goals.

“Mountain forests are being affected by many global challenges, such as climate change, water scarcity, loss of biodiversity and desertification, but they also offer significant opportunities for solutions. Sustainable development of mountain forests requires and deserves a prominent place on the international agenda,” Mr. Rojas said.

The report also emphasizes that mountain people play a key part in preserving this ecosystem and should therefore be empowered by governments so they can have a say in the management of the local forestry resources, and share the benefits from forest use and conservation.

A ceremony will be held at FAO headquarters in Rome on 12 December to mark International Mountain Day, whose theme this year is “Mountain forests – roots to our future.”

A World Mountain Forum also opened today in Verbier, Switzerland, to highlight the key role of mountains in ecosystems. On Sunday, the forum will connect via a live stream to conservation experts, local government and private sector representatives as well as UN officials in various parts of the world to discuss new approaches in mountain conservation.

The forum, in collaboration with the UN Environmental Programme (UNEP), will also launch a new public-private partnership initiative that would support sustainable mountain development efforts around the world. 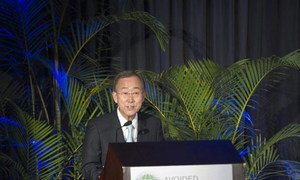