9 December 2011
Secretary-General Ban Ki-moon paid an unannounced visit to Mogadishu today together with the President of the General Assembly, Nassir Abdulaziz Al-Nasser, to express the solidarity of the United Nations at what he called a “critical juncture” for the future of the Somali people.

“We have come here to see for [ourselves] the changes under way and show the strong solidarity of the United Nations and the broader international community,” Mr. Ban said at a press conference in the capital.

This is the first time that a Secretary-General and Assembly President have visited Somalia together, and the first by a UN chief in nearly two decades. The two men met with President Sheikh Sharif Ahmed and other leaders to discuss the way ahead and how the international community can help the country, which has been torn by factional strife for the past 20 years.

“I believe we are now at a critical juncture – a moment of fresh opportunities for the future of [the] Somali people,” said Mr. Ban.

“On the political front, to bring a new measure of stability and possibilities to people’s lives. On the military front, to consolidate gains,” he stated. “On the recovery front, to help break the cycle of famine, poverty once and for all.”

Mr. Ban said he stressed to the Somali leadership the importance of “seizing the moment,” adding that there is a very limited window of opportunity.

On the political front, he emphasized the need to move ahead quickly with the roadmap that was agreed in September and which spells out priority measures to be implemented before the current transitional governing arrangements end next August, in the areas of security, the drafting of a new constitution and reconciliation.

“It must be done in an inclusive and transparent way,” said the Secretary-General, adding that further extension of this roadmap will be “untenable.” He also highlighted the need to advance on the constitution and parliamentary reform.

To further these efforts, Mr. Ban announced that the UN Political Office for Somalia (UNPOS), headed by Special Representative Augustine Mahiga, will re-locate from Nairobi to Mogadishu in January.

On the military front, he lauded the efforts of the African Union Mission in Somalia (AMISOM), and stressed the need for the mission to deploy at its full strength of 12,000 troops.

He also paid tribute to the work done by UN agencies and non-governmental organizations (NGOs) on the humanitarian front, noting that their collective efforts have saved thousands of lives since famine was declared in July.

However, the situation – particularly in central and southern Somalia – remains dire, Mr. Ban said, noting that four million people are in crisis, and 250,000 people face famine.

Meanwhile, he drew attention to the new threats to humanitarians, and condemned the recent attacks and actions of the Islamist militant group Al-Shabaab.

“Humanitarian organizations in Somalia remain strictly neutral. Their mission is only to save lives, to deliver life-saving humanitarian assistance,” he emphasized. “Any attack on them is an attack on the most vulnerable people in the country.”

The Secretary-General stressed that Somalia has been suffering “too long and too much.” It is time for Somalis to reconcile with each other and ensure the peace and security necessary so that the Transitional Federal Government (TFG) can deliver basic needs and services to the people.

On his way back to Nairobi from Mogadishu, the Secretary-General visited the Dadaab refugee complex, which hosts the largest number of Somali refugees. He met with refugees and elders in the camp, as well as UN staff working to assist the refugees, during what he described as a “humbling and very sad” visit. 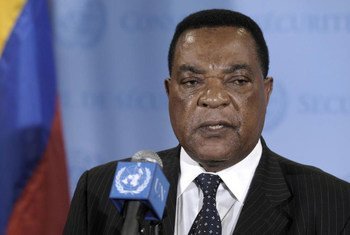 5 December 2011
The United Nations envoy for Somalia today strongly warned anyone trying to undermine an agreed framework outlining political actions required to restore peace and stability in the country that their actions will not be tolerated by the international community.