8 December 2011
Financing received through the proposed Green Climate Fund should not exacerbate developing countries’ debt burdens, an independent United Nations human rights expert said today, calling for international banking institutions not to have too great an influence on the fund.

“Climate finance should be provided in the form of grants and not loans,” UN Independent Expert on foreign debt and human rights Cephas Lumina said in a statement.

“Climate loans will add to the existing external debt burdens of recipient countries, many of which simply do not have the capacity to repay further loans without undermining their already precarious development prospects.”

The Green Climate Fund was created during last year’s conference in Cancún, Mexico, to help developing nations protect themselves from climate impacts and build their own sustainable futures.

But the fund has not been launched yet, and Secretary-General Ban Ki-moon called on developed countries this week at the UN Climate Change Conference in Durban, South Africa, to inject the necessary capital to kick-start it.

Mr. Lumina called on UNFCCC members to ensure the fund adopts a “country-driven approach and promotes meaningful and effective participation of all stakeholders, including communities, farmers, workers, women and other marginalized groups.”

Mr. Lumina also stressed the Fund’s financing decisions should not be disproportionately influenced by the joint World Bank (WB) and International Monetary Fund (IMF) Debt Sustainability Framework (DSF), due to the history of the two multilateral creditors.

“The DSF is biased by its very nature, is based on questionable growth assumptions and is concerned only with capacity to repay, not what the impacts of payments are,” he noted.

During last year’s UN Climate Change Conference, countries decided to invite the World Bank to serve as interim trustee of the Green Climate Fund. However, this decision has sparked concern among climate change activists, human rights groups and some developing countries.

“The Bank should not have a central role in the new climate finance mechanism,” Mr. Lumina said. “Its problems with unsuccessful projects, history of forcefully encouraging developing countries to implement economic policies that have an adverse social impact, and its record of financial support for projects harmful to the environment that may have contributed to climate change, suggest that it may not be the most legitimate institution for managing and delivering climate finance.”

Mr. Lumina, who serves in an unpaid and independent capacity and reports to the Human Rights Council, also warned against the over-reliance on private capital as he said this would subordinate public interest to the unregulated pursuit of profit.

“Climate finance is not as a matter of charity, and should be seen as a legal obligation under the UNFCCC and a moral responsibility on the part of those that have contributed the most to it.”

Time to fight back against ‘cancer’ of corruption – UN chief 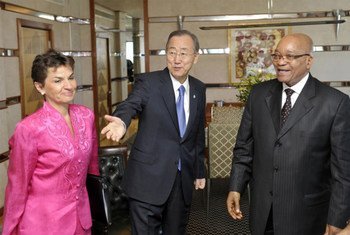