“I am encouraged to see that forest countries are acting to reduce deforestation, and that donor countries are pledging to support these activities,” Mr. Ban said at the UN Climate Change Conference in Durban, South Africa. “Yet, forests continue to disappear at an alarming rate. We must do more, and with a greater sense of urgency.”

The UN Collaborative Programme on Reducing Emissions from Deforestation and Forest Degradation (REDD+) seeks to create financial value for the carbon stored in forests, offering incentives for developing countries to reduce emissions and invest in low-carbon technologies to sustainable development.

Nations at last year’s UN Climate Change Conference in Cancún, Mexico, agreed to take on REDD+. However, the Secretary-General stressed there is much work to be done to fully implement the programme.

“Last year, in Cancún, countries agreed to take the REDD+ agenda forward,” he said. “This was an important recognition of the win-win that forests represent for mitigating climate change and benefiting people, ecosystems and biodiversity.”

Mr. Ban emphasized private sector partnerships “are essential for implementing the REDD+ agenda” and strengthening efforts in the Congo Basin and Amazon Basin regions as well in South-East Asia.

Mr. Ban stressed these partnerships need to bolster local communities and smallholder farmers as well as respect the rights of indigenous people and empower women, adding that it is innovative and creative solutions that will “reduce poverty and help communities to adapt to climate change” and help create a “deforestation-free” market.

In addition, the Secretary-General also urged countries to increase financing on the initiative by the end of the week.

Mr. Ban’s appeal for REDD+ is part of the four points he laid out yesterday in his remarks at the start of the high-level meeting of the 17th session of the Conference of the Parties (COP17), which include implementing the Cancún Agreements, determining the future of the Kyoto Protocol, building on a vision for an effective and fair binding climate agreement, and firming up short and long-term financing commitments.

“We have entered a time of economic uncertainty, an era of fiscal austerity,” Mr. Ban said. “But I cannot stress enough how important it is for developed countries to fulfil their commitments.”

Mr. Ban underscored that agreeing on financing must be a key priority for States. In particular, he asked developed countries to help inject initial capital to the Green Climate Fund, which would help developing nations protect themselves from climate impacts and build their own sustainable futures.

“I call on UNFCCC parties to show leadership and ensure that any remaining differences on the design of the fund will be resolved here in Durban, so the fund can be launched,” he said.

“This is essential for helping developing countries to make progress on adaptation and mitigation. The immediate challenge is how to get a scaled-up climate finance system up and running,” he added.

The UN Climate Change Conference has seen commitments from various countries to reduce greenhouse gas (GHG) emissions. Today, South Africa announced it would implement a phase-out policy for inefficient lighting, effectively ending the use of incandescent light bulbs which are not as efficient or as cost-saving as energy efficient ones.

“Fast tracking more energy-efficient lighting is without doubt one of the low-hanging fruit offering not only emissions saving but cost savings to a company or a household’s budget, said Achim Steiner, UNEP Executive Director.

“The aim of achieving a global phase-out by 2016 is not only possible but infinitely doable,” he said, referring to UNEP’s goal to end the use of incandescent light bulbs in less than five years, resulting in the reduction of GHG emissions due to electricity and lighting by half. 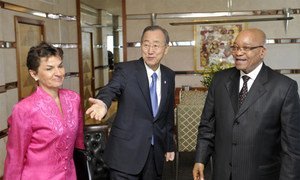