UN Photo/Jean Marc Ferré
Maina Kiai, Special Rapporteur on the rights to freedom of peaceful assembly and of association.
7 December 2011

A group of independent United Nations human rights experts today warned that a new bill in Malaysia restricts the right to peaceful assembly with measures such as a ban on street protests and conditional access for media to public gatherings.

The Peaceful Assembly Bill, which has been approved by the Malaysian Parliament, also includes a prohibition on non-citizens and citizens under the age of 21 to assemble peacefully, according to a news release issued by the experts.

“Many of these restrictions are not justifiable under international law,” said the Special Rapporteur on the rights to freedom of peaceful assembly and of association, Maina Kiai.

He voiced his deep regret that neither the Human Rights Commission of Malaysia (SUHAKAM), nor civil society, was meaningfully consulted in the drafting of the bill, which also contains a vague definition of assembly and broad restrictions and conditions on gatherings.

The bill gives “excessive” authority and power to law enforcement officials and to the minister in charge of home affairs on matters related to assemblies, as well as full discretion to the police to make any form of recording of assemblies, stated the news release.

Margaret Sekaggya, the Special Rapporteur on human rights defenders, said she is particularly alarmed by the provision prohibiting citizens below 21 years of age to assemble. “Political and social participation through peaceful protests are not only an educational experience for children, youth and students but also an investment for society as a whole,” she stated.

The Special Rapporteur on the right to freedom of expression, Frank La Rue, urged the Government to seriously reconsider the adoption of the bill, stating that the ability of all individuals to express themselves freely, including in the form of peaceful assemblies, is “a litmus test for the level of democracy in any country.”

Also adding his voice to the call for an urgent review of the bill is the Special Rapporteur on the human rights of migrants, François Crépeau, who noted that under international human rights law, everyone has the right to freedom of assembly and association, without distinction of any kind, including nationality.

The experts all report to the UN Human Rights Council in Geneva in an independent and unpaid capacity.

In July the Office of the UN High Commissioner for Human Rights (OHCHR) had voiced concern about the apparent use of excessive force against protesters by Malaysian police and possible retaliation against demonstrators who were arrested and released.

♦ Receive daily updates directly in your inbox - Subscribe here to a topic.
♦ Download the UN News app for your iOS or Android devices.
peaceful assembly 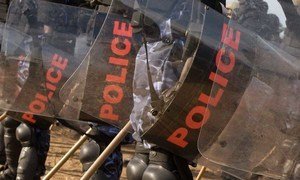 The United Nations human rights office today voiced concern about the apparent use of excessive force against protesters on the weekend by Malaysian police and possible retaliation against demonstrators who were arrested and released.