Two United Nations agencies have strongly condemned the recent murder of a Mexican peace activist and the attempted killing of the chief of a women’s rights organization in the same country and called on the Government to investigate and prosecute those responsible.

Nepomuceno Moreno Núñez, a member of the Peace with Justice and Dignity Movement, was murdered on 28 November in the northern state of Sonora. He joined the movement after the disappearance of his son in July last year, demanding an investigation and punishment of the perpetrators.

Two months ago, during an encounter of the movement with Mexico’s President Felipe Calderón, he revealed he was under a lot of pressure and turned in all the documents related to his son’s disappearance.

Norma Andrade, the co-president of the non-governmental organization (NGO) “Nuestras Hijas de Regreso a Casa” (Our Daughters Come Home) in Ciudad Juárez, was severely injured by a gunshot on 2 December.

Ms. Andrade’s daughter was murdered in 2001. Since then, she has been defending women’s rights, demanding justice for the hundreds of women have been murdered in the state of Chihuahua over the past decade.

Javier Hernández Valencia, representative for the UN Office of the High Commissioner for Human Rights (OHCHR) in Mexico, called for authorities to implement mechanisms that would protect human rights defenders in the country.

“As time passes the risks that human rights defenders and victims of human rights violations increase drastically,” he said in a statement issued yesterday.

A representative for the UN Entity for Gender Equality and the Empowerment of Women (UN Women), Ana Güezmes, stressed the “necessity to strengthen the right to justice, and to guarantee the rectifying the damage suffered by victims and their families, as well as deploying more efficient actions to prevent, sanction and eradicate impunity and violence, in particular violence against women.”

Both officials reiterated the need for the Mexican Government to establish dialogue with NGOs to create a national mechanism that can guarantee the security of those individuals that dedicate their lives to the promotion and defence of human rights. 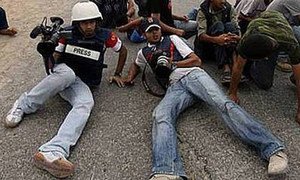 The United Nations human rights office today expressed concern over the increase in the number of killings of journalists in Mexico this year, and urged the country’s authorities to launch immediate investigations to punish the perpetrators.