Congolese post-election violence will not be tolerated, ICC prosecutor warns

As the people of the Democratic Republic of the Congo (DRC) await the results of last week’s presidential and legislative elections, the prosecutor of the International Criminal Court (ICC) warned today that any outbreak of poll-related violence will be investigated and those found responsible prosecuted.

“We continue to receive multiple reports of violent attacks against civilians, of fighting between rival factions, as well as attacks by armed groups and the national security forces,” said prosecutor Luis Moreno-Ocampo in a press release.

“We are closely watching the situation on the ground, and recourse to violence will not be accepted.”

Congolese went to the polls on 28 November to cast their ballots in presidential and parliamentary elections – only the second time that the country has held multi-party polls since independence from Belgium in 1960.

Press reports have indicated that there is growing tension in the capital, Kinshasa, as results trickle in, with at least one politician and his supporters reportedly claiming to have won.

“We are urgently requesting information from the DRC authorities on the allegations that security forces fired at demonstrators,” said Mr. Moreno-Ocampo.

“We welcome and are closely following the initiatives taken by national authorities to investigate and prosecute those responsible for such attacks against the civilian population.”

He said he was also aware of reports of violence by armed groups apparently associated with different political parties, politicians and party officials against demonstrators from other parties.

“As we have shown in both Kenya and Côte d’Ivoire, planning and executing attacks on civilians for electoral gain will not be tolerated. This court can investigate and prosecute you if you are responsible for committing ICC crimes, irrespective of position, and irrespective of political affiliation,” said the prosecutor.

“I urge leaders, commanders, and politicians on all sides to calm your supporters. Electoral violence is no longer a ticket to power, I assure you. It is a ticket to The Hague,” he added. 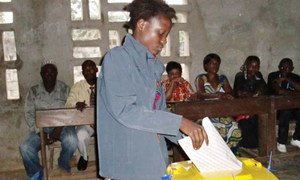 The Security Council today congratulated the people of the Democratic Republic of the Congo (DRC) for turning up in large numbers to cast their ballots in this week’s presidential and legislative elections, calling it a demonstration of their commitment to democracy.