The International Criminal Court (ICC) said today that a hearing to determine whether there are sufficient grounds to confirm charges against Laurent Gbagbo, the former president of Côte d’Ivoire, who stands accused of crimes against humanity, will begin on 18 June next year.

An ICC pre-trial chamber set the date at Mr. Gbagbo’s initial appearance in the court in The Hague, the Netherlands, where the tribunal is based.

The charges against Mr. Gbagbo, 66, are connected to the bloody election-related violence that erupted in Côte d’Ivoire nearly a year ago. He was surrendered to the ICC last week by Ivorian authorities.

At today’s hearing, in the presence of representatives from both the prosecution and the defence, the court verified the identity of Mr. Gbagbo and ensured that he was clearly informed of the charges brought against him and of his rights under the treaty that established the ICC.

A confirmation of charges hearing is held to determine whether there is sufficient evidence to establish substantial grounds to believe that the accused committed each of the crimes charged. If the charges are confirmed, the pre-trial chamber commits the case for trial before a trial chamber.

Mr. Gbagbo allegedly bears individual criminal responsibility, as indirect co-perpetrator, for four counts of crimes against humanity, namely murder, rape and other forms of sexual violence, persecution and other inhuman acts, committed in Côte d’Ivoire between 16 December 2010 and 12 April this year.

In early October, the ICC authorized prosecutors to probe alleged abuses committed during the bloody unrest in Côte d’Ivoire, which erupted when Mr. Gbagbo refused to step down after he lost the United Nations-certified election to Alassane Ouattara, who was eventually sworn in after Mr. Gbagbo surrendered in April.

According to sources quoted by the prosecution in its application, at least 3,000 people were killed, 72 disappeared and 520 others were subject to arbitrary arrest and detentions during the post-election violence.

The pre-trial chamber has found that there are reasonable grounds to believe that in the aftermath of the presidential elections, pro-Gbagbo forces attacked civilians in the commercial capital, Abidjan, and in the country’s west, targeting people they believed were supporters of the rival presidential candidate.

The attacks were allegedly committed pursuant to an organizational policy and were also widespread and systematic as they were carried out over an extended period, in large geographic areas, and following a similar general pattern. The raids were allegedly often directed at specific ethnic or religious communities. 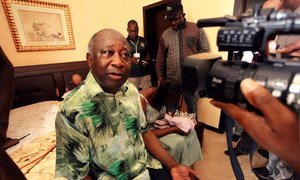 Laurent Gbagbo, the former president of Côte d’Ivoire, arrived at the International Criminal Court (ICC) today to face charges of crimes against humanity committed during the country's recent post-election violence.