Secretary-General Ban Ki-moon today urged the private sector to play a more active role in combating modern forms of slavery, saying that humanity still lives in a world blighted by serfdom and other practices despite efforts by governments and civil society to end the scourge.

“To eradicate contemporary forms of slavery, we need new strategies and measures that can unite all actors,” said Mr. Ban in his message to mark the International Day for the Abolition of Slavery. “While governments bear the primary responsibility, the private sector has an integral role to play.”

He recalled that the United Nations Human Rights Council (UNHRC) earlier this year endorsed the Guiding Principles on Business and Human Rights, outlining how States and businesses should implement the UN “Protect, Respect and Remedy” Framework.

“The corporate responsibility to respect includes ensuring that their activities do not cause or contribute to contemporary forms of slavery in the workplace, and taking steps to stop it from happening in supply chains and elsewhere,” said Mr. Ban.

He pointed out that the Global Initiative to Fight Human Trafficking (UN.Gift), which includes the International Organization for Migration (IOM), the Organization for Security and Cooperation in Europe (OSCE) and the UN Global Compact corporate sustainability initiative, has been active in encouraging the private sector to contribute to raising awareness on modern slavery and taking concrete steps to eliminate it.

This year also marks the 20th anniversary of efforts by the UN Voluntary Trust Fund on Contemporary Forms of Slavery to help victims of slavery regain their independence, lives and dignity.

The Fund has supported projects that provide vocational training, education, legal advice, medical and psychological assistance. It has also targeted the social factors that can foster slavery. It needs a minimum of $1.5 million to fulfil its mandate, but less than a third of the required funding has been secured to date.

“On this International Day, I appeal to all governments, business enterprises, NGOs [non-governmental organizations] and other partners to demonstrate their commitment to fighting slavery by making a financial contribution to the Fund.”

Contemporary forms of slavery include debt bondage, serfdom and forced labour; trafficking of persons and trafficking for the purpose of organ removal; sexual exploitation, the worst forms of child labour, forced marriage, the sale of wives, widow inheritance, and the forced recruitment of children for use in armed conflict, the Secretary-General added.

The UN independent expert on contemporary forms of slavery, Gulnara Shahinian, in her message for the Day noted that “slavery is not history” and persists in spite of the significant progress in the fight against it.

“However, victims of slavery are not alone,” Ms. Shahinian stressed, pointing out the UN Trust Fund has been bridging the gaps not addressed by other donors and has been able to provide concrete assistance to victims.

Virginia Murillo, the chair of the Board of Trustees for the Fund said: “It has supported more than 400 projects in 90 countries, which have directly assisted thousands of victims and potential victims in all parts of the world.” 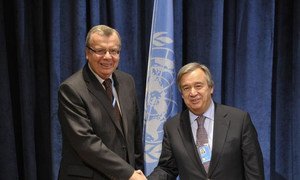 The United Nations agencies that deal with helping refugees and with fighting crime signed a joint agreement today to work together more closely to combat human trafficking and migrant smuggling.