A family of Somali refugees in a makeshift shelter in Kobe camp, Ethiopia
2 December 2011

Hundreds of refugees in southern Ethiopia have been relocated from an overcrowded transit centre to a new camp, the fifth one in the area for Somalis fleeing conflict and drought in their homeland, the United Nations refugee agency reported today.

The Bur Amino camp in Ethiopia’s Dollo Ado region was opened on Wednesday and has received the first group of some 400 Somali refugees so far, Andrej Mahecic, spokesperson for the UN High Commissioner for Refugees (UNHCR), told reporters in Geneva.

“The relocation to Bur Amino will decongest the transit centre,” said Mr. Mahecic. “For weeks, 7,500 recent arrivals from Somalia had been living in the centre, built to host one third of that population for a few days only.

“Rain and poor shelter conditions exacerbated the already low nutritional and health status of the refugees there, especially the children,” he added.

On arrival at the new camp, the refugees underwent health and nutrition screening before being shown to their tents and given hot meals. Those being relocated to Bur Amino will benefit from food distribution, supplementary feeding for malnourished children, water, health and sanitation facilities.

UNHCR and Ethiopian authorities are continuing with the gradual relocation, moving 500 refugees every four days as parts of the new camp are still being developed.

Ethiopia has received more than 98,000 Somali refugees since the start of this year, adding to an existing refugee population of some 41,000 in older camps.

Another 163,000 Somalis have arrived in Kenya and over 4,800 in Djibouti, bringing the total number of Somali refugees in the region to more than 950,000, according to UNHCR. 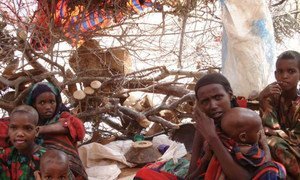 Conditions worsen for famine-wracked Somalis in Mogadishu, but improve in Ethiopia

Health and nutrition rates have deteriorated for famine-wracked Somalis displaced within their own country but improved for those who have fled to Ethiopia, the United Nations refugee agency reported today.