The United Nations has launched a social media campaign to encourage people to get involved in the global human rights movement, inspired by the role played by tools such as Facebook and Twitter in the awakening that transformed parts of the Arab world this year.

She noted that the popular uprisings across North Africa and the Middle East illustrated the power and reach of social media, as millions of people demanding greater rights and freedoms harnessed Facebook, Twitter, YouTube and other tools.

“The message of this unexpected global awakening was carried in the first instance not by the satellites of major media conglomerates, or conferences, or other traditional means – although these all played a role – but by the dynamic and irrepressible surge of social media,” Ms. Pillay said, adding that the results have been “startling.”

The so-called Arab awakening has already led to the toppling of long-standing regimes in Tunisia, Egypt, Libya and Yemen, and to ongoing protests in a number of other countries.

“Today, as in the past, editorial and financial factors – as well as access – determine whether or not protests, and repression of protests, are televised or reported in newspapers around the world,” said Ms. Pillay.

“But, wherever it happens, you can now guarantee it will be tweeted on Twitter, posted on Facebook, broadcast on YouTube, and uploaded on to the Internet. Governments no longer hold the ability to monopolize the dissemination of information and censor what it says.

“Instead we are seeing real lives in real struggle, broadcast in real time – and it is in many ways an exhilarating sight,” she said. “In sum, in 2011, human rights went viral.”

The campaign launched by the High Commissioner’s Office (OHCHR) comes ahead of Human Rights Day, observed annually on 10 December – the birthday of the Declaration.

OHCHR already started an online discussion on Facebook and Twitter on 10 November called “30 Days and 30 Rights,” which counts down to Human Rights Day with a daily posting about one specific article of the Declaration.

Meanwhile, questions are pouring in via different social media platforms for a global human rights dialogue the High Commissioner is hosting on the eve of Human Rights Day that will be webcast and streamed live. 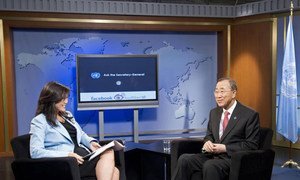 UN chief takes to cyberspace for global conversation with public