In Kisangani, DRC, a woman casts her ballot at a polling centre during national elections.
1 December 2011

Top United Nations officials today deplored the violence that marred this week’s elections in certain areas in the Democratic Republic of the Congo (DRC) and urged all sides to exercise restraint and to resolve any differences through peaceful means.

Top United Nations officials today deplored the violence that marred this week’s elections in certain areas in the Democratic Republic of the Congo (DRC) and urged all sides to exercise restraint and to resolve any differences through peaceful means.

Millions of Congolese went to the polls on Monday to cast their votes in presidential and parliamentary elections – only the second time since its independence in 1960 that the country held democratic elections. They are now awaiting the announcement of the preliminary results by the Independent National Electoral Commission (CENI).

The UN Joint Human Rights Office (UNJHRO) in DRC, which has been monitoring election-related violence, is investigating reports that more than 10 people have allegedly been killed by security forces and supporters of political parties, and many more wounded through the use of live ammunition, in the capital, Kinshasa, since 26 November.

“Clearly, political differences cannot be resolved through killings, and security forces should not use disproportionate force in the conduct of crowd control,” said High Commissioner for Human Rights Navi Pillay. “Such violations, as well as violence committed by supporters of political parties, must be investigated and perpetrators brought to justice without delay.”

Deploring the killings and other acts of violence committed over the past few days, Ms. Pillay stressed that political leaders from all sides have a crucial role to play at this important crossroads in the history of DRC.

“It is their responsibility to resolve tensions through peaceful means,” she stated in a news release. “They must realize that they may be held criminally responsible for their actions as well as for acts committed by their supporters.”

The High Commissioner urged all sides to exercise restraint and to resolve differences peacefully to prevent the country from sliding into a cycle of post-electoral violence.

The Secretary-General’s Special Representative, Roger Meece, also deplored the violence that marred the elections in certain areas throughout the country, and called on all political leaders and the general population to remain calm.

He shared the concerns expressed by observers regarding the reported irregularities and the need to assess their impact on the electoral process, according to a news release issued by the UN peacekeeping mission in the country (MONUSCO).

Earlier this month, UNJHRO issued a report that detailed numerous human rights violations during the pre-electoral period in DRC, and warned that such incidents could threaten the democratic process and result in post-electoral violence.

The report documented 188 violations apparently linked to the electoral process that occurred between 1 November 2010 and 30 September this year, including acts of intimidation, threats, incitement, arbitrary arrests and violence. 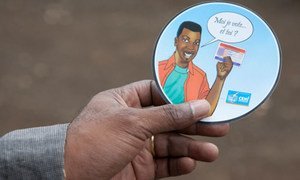 A new United Nations report details numerous human rights violations during the pre-electoral period in the Democratic Republic of the Congo (DRC), and warns that such incidents could threaten the democratic process and result in post-electoral violence.