The Security Council today agreed to extend by another year the arms embargo and other sanctions it has imposed against armed rebel groups in the Democratic Republic of the Congo (DRC) for nearly a decade.

In a resolution adopted unanimously, the 15-member Council extended the sanctions through 30 November 2012 and asked Secretary-General Ban Ki-moon to renew the mandate of the group of experts monitoring these measures and to appoint a sixth expert – on natural resources – to the team.

The sanctions imposed by the Council comprise an arms embargo against armed groups that are not part of the Government’s integrated army or police units following the end of the civil war, and also a travel ban and asset freeze against individuals or entities that have violated the embargo or are otherwise designated.

The sanctions were introduced in 2003 as the DRC reached the end of a brutal civil war that engulfed the vast country on and off for five years and is estimated to have killed as many as five million people.

Yesterday the Council committee dealing with the sanctions added Ntabo Ntaberi Sheka, the commander-in-chief of the notorious armed group known as the Mayi Mayi Sheka, to its travel ban and assets freeze list.

The group is responsible for numerous attacks, including the rape of hundreds of women in Walikale in the DRC’s far east last year, and Mr. Sheka, 35, was indicted for his alleged role in that attack.

In today’s resolution the Council also recommended that all countries, but particularly those in the region, publish regular statistics for the import and export of natural resources such as gold, cassiterite, coltan, wolframite, timber and charcoal.

It also called on those countries to boost the sharing of information and joint initiatives to combat the exploitation of such natural resources by armed groups and criminal networks. This exploitation was one of the key causes of the civil war. 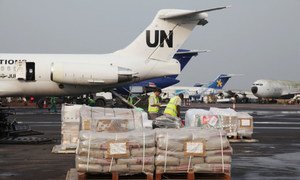 As Congolese prepare to vote, Ban calls for peaceful and secure elections

Secretary-General Ban Ki-moon today urged politicians and voters in the Democratic Republic of the Congo (DRC) to ensure that tomorrow's presidential and parliamentary elections take place as peacefully and smoothly as possible.