The situation in Kosovo remains precarious and poses certain dangers, as witnessed in recent clashes, but it also offers opportunities to overcome long-standing tensions that warrant the support of the international community, the top United Nations envoy there said today.

The ongoing dispute between Kosovo and Serbia over the control of two border crossings in northern Kosovo has led to several violent clashes between local Serb residents and the NATO-led Kosovo Force (KFOR).

For some months now UN officials have called on all concerned to refrain from unilateral actions or the use of force, which could escalate tensions in the area, and urged Pristina and Belgrade to demonstrate their full commitment to dialogue, reconciliation and peace.

“While some speak of Kosovo as a ‘frozen conflict’, I believe the situation is fluid and dynamic,” Farid Zarif, the Secretary-General’s Special Representative and head of the UN peacekeeping force in Kosovo (UNMIK), told the Security Council in a briefing.

“This potentially entails greater dangers, but equally, there exist genuine opportunities to pursue a viable, sustainable resolution that could overcome the long-standing tensions,” he added. “It is my belief that this can best be achieved through the stewardship of this Council…

“No less than the taking of full, statesman-like responsibility is demanded if the present opportunities for moving toward peaceful, durable solutions are not to be missed.”

Mr. Zarif noted that, regrettably, the situation in the north has also become intertwined with the politics of the Serbian elections due next spring as well as with the current political dynamics in Pristina.

“We are working hard to help dissipate tensions and create an atmosphere in which durable solutions are possible,” he said. “Our core messages have been to exercise patience, refrain from the use of force, avoid violence, and support the Security Council-mandated international presences in the fulfilment of their responsibilities by not impeding their freedom of movement.”

He reported that one element of the UN’s strategy of engagement has already borne some fruit, namely the toning down of rhetoric by the various sides.

Nevertheless, he stated that the situation in the north continues to be “extremely volatile” and the combined factors of frustration, fear and mistrust could easily and quickly provide the spark that could ignite violence, as was demonstrated by the recent clashes.

“The situation calls for strong, united leadership from the international community,” he stressed. 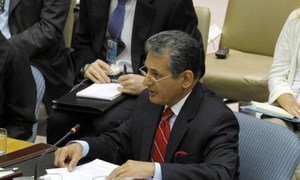 The top United Nations envoy for Kosovo has strongly condemned yesterday’s shooting incidents in the northern part of Mitrovicë/Mitrovica that resulted in one death and two injuries, and called for an investigation to determine the cause of the violence and bring the perpetrators to justice.