Adel Yahya/IRIN
Child IDPs in al-Jawf, Yemen, pay the price for lack of access for aid workers to reach them with food aid.
29 November 2011

Millions of people in Yemen are facing a severe humanitarian crisis, a senior United Nations relief official said today, warning that the situation is likely to deteriorate over the next year despite the recent accord to restore peace and stability.

“I remain deeply concerned by the humanitarian situation in Yemen,” Assistant Secretary-General for Humanitarian Affairs Catherine Bragg said after a four-day visit.

“We are seeing chronic deprivation made worse by continuing violence, with some of the world’s highest malnutrition rates, a breakdown of essential services and a looming health crisis,” she added.

Ms. Bragg, who is also Deputy Emergency Relief Coordinator, undertook the visit to assess the intensifying humanitarian crisis in some parts of the country and to discuss ways of boosting the response to the growing needs with the UN’s partners.

According to the UN Office for the Coordination of Humanitarian Affairs (OCHA), tens of thousands of people have been displaced by the fighting in Abyan governorate and most have found refuge with host families or are living in schools in Aden and neighbouring governorates.

Ms. Bragg said that she impressed on the local authorities the need to find durable solutions for internally displaced persons (IDPs) living in schools and to ensure that humanitarian workers have access to all areas where civilians are being displaced.

She also travelled to northern Yemen, where some 300,000 people remain displaced by the conflict in Sa’ada. There she met families living in Al-Mazrak camp and visited a supplementary feeding centre in the area.

Many people are unable to return to their homes because of insecurity, fears of retaliation and loss of livelihoods and assets. “Despite the best efforts of aid agencies, I noticed a deterioration of the situation compared to what I saw a year ago,” noted Ms. Bragg.

Her visit comes just days after an agreement was reached paving the way for a credible political transition and providing a detailed roadmap for change through the broad participation of Yemen’s citizens, who have been engaged in pro-democracy protests since earlier this year.

However, despite the signing of the transition agreement, humanitarian needs in Yemen are projected to deteriorate over the next year, according to OCHA.

Ms. Bragg called on the Yemeni authorities and others involved in the conflict to protect civilians and ensure their access to basic services. “We cannot risk the situation becoming a catastrophe,” she stressed. 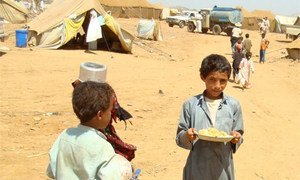