Secretary-General Ban Ki-moon has condemned the firing of at least two rockets into Israel from southern Lebanon last night and joined the United Nations peacekeeping force in the area in urging maximum restraint by all parties.

“There were no reports of casualties on either side and the situation is now calm,” Mr. Ban’s spokesperson said in a statement, adding that the UN Interim Force in Lebanon (UNIFIL) is investigating the circumstances of the incident in cooperation with Lebanese and Israeli forces.

“The Secretary-General urges all parties to exercise maximum restraint.”

According to UNIFIL, the firing occurred shortly after midnight from the general area of Rumaysh in southern Lebanon. The Israel Defense Forces (IDF) returned artillery fire directed at the location from where the rocket fire originated.

“This is a serious incident in violation of UN Security Council resolution 1701 and is clearly directed at undermining stability in the area,” UNIFIL Force Commander Major-General Alberto Asarta Cuevas said in a press statement.

Resolution 1701 ended the month-long war between Israel and the Lebanon-based Hizbollah in 2006. It also calls for respect for the so-called Blue Line separating Israel and Lebanon, the disarming of all militias in Lebanon, and an end to arms smuggling in the area.

“It is imperative to identify and apprehend the perpetrators of this attack and we will spare no efforts to this end working in cooperation with the LAF [Lebanese Armed Forces]. Additional troops have been deployed on the ground and patrols have been intensified across our area of operations to prevent any further incidents.”

UNIFIL added that there has been no immediate claim of responsibility for the attack.

The Security Council is scheduled to discuss implementation of resolution 1701 in a closed-door meeting in New York later today.

Security Council calls for efforts to ensure stability in Lebanon 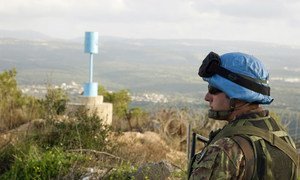 Lebanon: UN force seeks to reduce tension over line of separation with Israel

The head of the United Nations peacekeeping force in Lebanon today discussed “critical issues” with Lebanese and Israeli commanders to prevent a recurrence of the exchange of gunfire earlier this month between the two armies across the line separating the countries.