The next two years will be crucial for promoting human rights across South-East Asia, but the lack of involvement by civil society in regional rights issues remains a “major concern,” the United Nations human rights chief warned today.

Concluding a three-day visit to the Indonesian island of Bali where she met the Association of Southeast Asian Nations’ (ASEAN) Intergovernmental Commission on Human Rights (AICHR) as well as a broad range of civil society organizations, UN High Commissioner for Human Rights Navi Pillay underscored the important developments made so far by regional and national human rights institutions.

“These regional human rights bodies are still young, but I hope and believe they will develop in the years to come, and we must be careful to encourage this evolution,” Ms. Pillay said while also commending Indonesia’s “very positive” approach to rights issues during its 2011 chairmanship of the regional body.

“It is important to sustain the momentum generated by the very welcome creation of these bodies, and it is now time to start shifting up through the gears,” she added.

In the first ever address by a UN High Commissioner for Human Rights to the AICHR, Ms. Pillay also cautioned that the regional rights body’s overall success would be judged by what it achieves and how its work compares with other regional bodies around the world.

“It will be very important to show tangible achievements and creative applications of AICHR’s mandate by the time the first review of AICHR takes place in 2014,” Ms. Pillay said.

The High Commissioner noted, however, a number of concerns raised by delegates representing 40 civil society organizations from nine of the 10 ASEAN Member States.

“The number one concern is that AICHR – as a body – is not talking to civil society,” she said. “No discussion of human rights can be complete or credible without significant input from civil society and national human rights institutions.”

She urged AICHR to listen to civil society’s calls for greater transparency, particularly regarding the drafting of the ASEAN Human Rights Declaration, due to be finalized by the end of 2011, pointing out that the document itself was “very important” and could “set the tone for years to come.”

“I can understand civil society organizations’ extreme frustration that they have not even been able to contribute to the drafting of the declaration, or been adequately consulted on its contents,” Ms. Pillay said, noting that the document’s drafting was happening against the backdrop of new political dynamics in Myanmar and the reform of draconian national security laws elsewhere in the region.

“At the same time, freedom of expression continues to be threatened in many countries and increasing religious intolerance has placed pressure on women and minorities,” she warned.

Over the weekend, Ms. Pillay also spoke by telephone with Myanmar opposition figure Daw Aung San Suu Kyi, with the two covering a range of issues including the recent release of political prisoners and the creation of a national human rights commission in the country.

“Aung San Suu Kyi has always been a tremendously inspirational figure when it comes to the promotion of human rights and democracy,” said Ms. Pillay. “I am encouraged by the fact that the Government of Myanmar, and in particular the President, have started a dialogue with her.”

Nevertheless, the High Commissioner acknowledged that Myanmar still had a long way to go and called for a system of independent human rights monitoring across the country.

“Aung San Suu Kyi was cautiously optimistic,” Pillay added. “I share her optimism and her caution. We should not underestimate the magnitude of the tasks that lie ahead for the Government, people and institutions of Myanmar as they develop their much-needed reforms.” 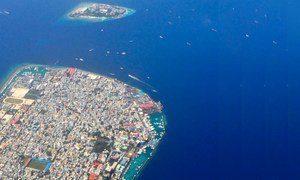 The Maldives has made "significant advances" during the first few years of its transition to democracy, but a large gap still exists between the rhetoric and the reality on the ground, the United Nations human rights chief said today.