New commitments by Somalia’s transitional Government and the Central African Republic (CAR) to end the use of child soldiers are encouraging, a United Nations envoy stressed today, but warned that despite these advancements, the situation in both countries remains volatile.

During her recent visit to Somalia, the Secretary-General’s Special Representative for Children and Armed Conflict Radhika Coomaraswamy secured a commitment from the President and Prime Minister Abdiweli Mohamed Ali to enter a process to end the recruitment and use of children by the Transitional Federal Government (TFG).

Somalia is one of the two countries in the world that have not ratified the Convention on the Rights of the Child (CRC). Ms. Coomaraswamy told reporters that the transitional Government agreed to appoint military and Government focal points to develop action plans on children associated with the TFG, and also committed accelerate the ratification of the CRC and its optional protocols.

During a press briefing, Ms. Coomaraswamy told reporters of her visit to a camp in downtown Mogadishu where Al-Shabaab defectors are held, including some 37 former child soldiers. She said she was highly alarmed by the living conditions and stressed it was a priority of the UN Children’s Fund (UNICEF) to separate children from these camps and provide them with help and special programmes.

The CAR also pledged to work with the UN to protect children through the ratification of the UN optional protocols on child soldiers by the end of the year.

Last week, Ms. Coomaraswamy signed an action plan and secured commitments for the end of recruitment and use of children by the Convention of Patriots for Justice and Peace (CPJP) and the Union des Forces Démocratiques pour la Rassemblement (UFDR), both rebel groups in CAR.

However, Ms. Coomaraswamy said there is still much to be done as children are recruited through many sources in both countries.

“As you know the State does not have a monopoly on violence,” she said. “We have five parties listed in CAR for recruiting and using of children. Three have signed action plans and we hope that they will be implemented, but the situation remains volatile.”

Ms. Coomaraswamy also stressed that ultimately the key to success would be the demobilization and reintegration of soldiers associated with armed groups.

The UN is supporting programmes for the reintegration of children associated with armed forces and groups. These programmes promote rehabilitation of children through counselling, back to school initiatives and skills-based training, including family reunification. 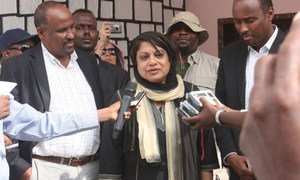 The United Nations envoy for children and armed conflict today secured a commitment from top officials in Somalia’s transitional Government to start a process to end the recruitment and use of children in the country’s armed forces.