Margot Wallström, Special Representative of the Secretary-General on Sexual Violence in Conflict
26 November 2011

The envoy spearheading United Nations efforts to eradicate sexual violence in conflict today urged the Government and all political leaders in Cote d'Ivoire to speak out against the scourge and ensure it is not used to intimidate people ahead of critical legislative elections slated to take place next month.

Margot Wallstrom, the Secretary-General's Special Representative on Sexual Violence in Conflict, issued a statement after an official visit to Cote d'

Ivoire, during which she met with top Government ministers, senior police officials, the chairman of the national truth and reconciliation commission and many survivors of sexual violence.

She noted that sexual violence was used as a tool of political intimidation during last year's presidential elections, which were won by Alassane Ouattara. The runner-up and incumbent Laurent Gbagbo refused to step down in the wake of the result, leading to months of deadly clashes until Mr. Gbagbo was eventually ousted and arrested this year.

Legislative elections, the first polls to be held since the post-electoral crisis, are scheduled to be held on 11 December.

In her statement Ms. Wallstrom called on the Government to "translate its promise to fight impunity for crimes of sexual violence into concrete action. In light of the upcoming? [elections], I call on all people in positions of influence to speak up against the use of sexual violence as a tool of political intimidation and to do their utmost to put in place measures to prevent sexual violence from being employed to this effect."

She stressed that "much more" is needed to assist survivors of sexual violence in Cote d'Ivoire, particularly in ensuring they have access to justice and helping them reintegrating into society. 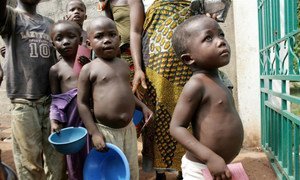 Thousands of Ivorian refugees to return to their villages – UN

The voluntary repatriation of internally displaced persons (IDPs) living in a refugee camp in western Côte d’Ivoire began this week with the support of the Government, the United Nations Office for the Coordination of Humanitarian Affairs (OCHA) reported today.