Two elements from Belgium and China were today added to the United Nations-backed list aimed at preserving and spotlighting the planet's most valuable intangible heritage.

Two elements from Belgium and China were today added to the United Nations-backed list aimed at preserving and spotlighting the planet's most valuable intangible heritage.

A 24-member intergovernmental committee, meeting in Bali, Indonesia, selected the Leuven age set ritual repertoire from Belgium and shadow puppetry from China to join the Representative List of the Intangible Cultural Heritage of Humanity.

The age sets of Leuven are considered a decade-long rite of passage for local men who share the same birth year, according to a press release issued by the UN Educational, Scientific and Cultural Organization (UNESCO).

Participants form a group at the age of 40 and take part in social and cultural activities that culminate in a celebration around the city's statue of the prophet Abraham. Each group has an older "godfather" to guide them and chooses its own medal, flag and uniform.

In China, shadow puppetry has a long and rich tradition, with colourful silhouette figures used to perform plays against a back-lit cloth screen. The puppets are made from leather or paper and the skills needed by participants, from manipulating the puppets to improvisational singing, are passed down through families and troupes.

Before its current session ends on Tuesday, the committee is expected to evaluate another 35 nominations for possible inclusion on the intangible heritage list. 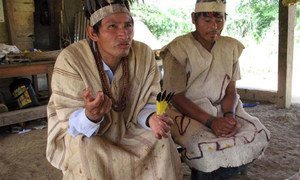 Sung prayers from an indigenous group in Peru and traditional weaving skills from the United Arab Emirates were added today to the United Nations List of Intangible Heritage in Need of Urgent Safeguarding.