The United Nations refugee agency voiced concern today over the movement of large numbers of people from Sudan into Ethiopia and South Sudan, saying that an estimated 76,000 people have moved since August, mainly as a result of conflicts.

Of the estimated 36,000 Sudanese refugees who moved towards Ethiopia, up to 17,000 have been transferred to camps, according to Raouf Mazou, the Deputy Director UN High Commissioner for Refugees’ (UNHCR) African Bureau in charge of Eastern, Horn of Africa, Chad and Sudan.

The challenge UNHCR is facing is that the refugees have gone to extremely remote locations which are difficult to reach, Mr. Mazou told reporters in Geneva. Assistance had been provided by helicopter, he said, adding that up to 100,000 Sudanese could enter Ethiopia and South Sudan in the coming few weeks if the current trend continues.

Meanwhile, efforts are under way to encourage people to relocate from the Yida refugee site in South Sudan’s Unity State to safer area further south away from the border, according to the UN Office for the Coordination of Humanitarian Affairs (OCHA). The refugees fled fighting in Sudan’s Southern Kordofan state. 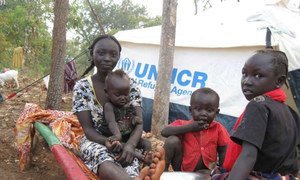