The participation of small States in Rio+20, next year’s United Nations conference on sustainable development, is vital, given many are already experiencing the effects of climate change, General Assembly President Nassir Abdulaziz Al-Nasser said today.

Speaking to the Forum of Small States (FOSS) in New York, Mr. Al-Nasser said the conference would provide a great opportunity for small countries to contribute their ideas and proposals on climate change and sustainable development.

The Forum of Small States was established in New York in 1992, and was set up as a platform to allow small States to discuss and foster common positions on issues of mutual concern to give them a larger voice at the UN.

“FOSS members may be small in the sizes of their population, but they never are small in terms of ideas and initiatives or in terms of dynamism of their human resources,” Mr. Al Nasser said, adding that since its creation two decades ago, the forum has gained credibility for its “contribution to advancing the agenda of the United Nations in a positive direction.”

Mr. Al-Nasser also spoke about other priorities in the General Assembly’s agenda, including revitalizing disarmament and nuclear-weapons-free zones around the world, defending human rights and combating intolerance, and facilitating peace processes in the Middle East. 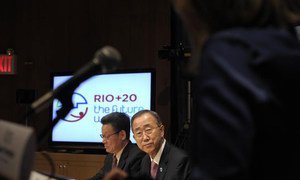 The United Nations today launched a campaign ahead of its major conference on sustainable development (Rio+20) in June next year, inviting governments, non-governmental organizations (NGOs) and people everywhere to engage in a global conversation about the communities they want to see in the future.