“We have seen remarkable results largely because of strong political will by countries, matched by the commitment and support of the international community, especially donors, to invest in the social sector,” said UNICEF Executive Director Anthony Lake.

However, he added that “we must continue to make investments in the social sector targeted at reaching the hardest to reach — in order to expand those gains and contribute to sustainable economic growth.”

Among the most prominent accomplishments highlighted by the report is the significant decline in child mortality rates. Last year, 12,000 fewer children under five died every day compared to 1990. Malnutrition also declined in developing countries in the past 18 years from 40 to 29 per cent, and children enrolment in pre-primary education increased by almost 40 per cent from 113 million to 157 million.

The authors of the report cite a number of factors for these advancements, but place particular emphasis on the high-level commitment and supportive government policies that have placed children’s well-being as a priority.

Another influencing factor has been an increase in targeted spending by countries and development assistance organizations. For example, the report makes direct links between levels of aid and the reduction in infant mortality in sub-Saharan Africa, finding that an additional one cent of annual aid per capita is associated with a reduction in infant mortality of 0.4 deaths per 1,000 infants.

In countries such as Bangladesh, which used to have a high child mortality rate, strong economic growth has fuelled poverty reduction programmes and as a result its under-five mortality rate declined by 67 per cent between 1990 and 2010.

However, UNICEF and Save the Children warned that much remains to be done, stressing that there is great need to focus on the poorest households, which have the highest rates of child deaths.

According to Save the Children UK, if the 42 developing countries that account for more than 90 per cent of child deaths all increased their efforts to cut under-five mortality and made progress across all income groups at the same rate as for the fastest-improving income group, an additional four million child deaths could be prevented over 10 years.

The report was released just before the 4th High Level Forum on Aid Effectiveness next week in Busan, South Korea, where world leaders will meet to review progress in improving the impact of development aid, ahead of the deadline for the Millennium Development Goals (MDGs), the UN goals of slashing poverty, hunger, lack of access to health care and education, and a host of other ills, all by 2015. 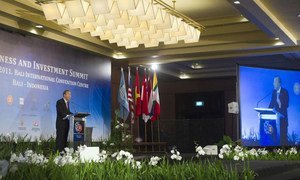 Secretary-General Ban Ki-moon today urged business leaders in the Asia and Pacific region to support the United Nations-led global effort to improve the health of women and children to create healthier communities across the world.