Yemen’s warring forces have agreed to a political transition settlement, the top United Nations envoy to the country announced today, calling the deal “an important milestone towards restoring peace and stability, maintaining national unity and territorial integrity, and laying the foundation for economic recovery.”

Jamal Benomar, the UN Special Adviser on Yemen, told reporters in Sana’a, the capital, that the negotiations on a settlement “have been successfully completed under my facilitation” and the pact was formally signed later in neighbouring Saudi Arabia.

Under the agreement, President Ali Abdullah Saleh will hand over his powers to Vice-President Abed Rabbo Mansour al-Hadi and presidential elections will be staged within 90 days. Over the next two years, a government of national unity will establish a national dialogue to ensure that a broad section of society takes part in determining Yemen’s future, with a constitutional review to follow.

Mr. Benomar said in a press statement that new political actors will be able to form political parties and compete in elections held at the end of the two-year transition process.

“These steps will, I hope, create a strong basis for a fully inclusive and participatory transition process, giving civil society, including the youth and women, a true stake in Yemen’s future,” he said.

“Towards this end, the parties have agreed to engage immediately with the youth movements in the squares to seek their support for and active participation in the transition process.”

Commending Yemen’s youth for generating “the momentum for change,” the Special Adviser said “the door is now open for you to make a real difference in the transition.”

Today’s agreement follows months of deadly clashes between supporters and opponents of Mr. Saleh and his regime, part of the so-called Arab Spring movement that has swept the Middle East and North Africa this year.

Mr. Benomar stressed that the agreement’s success depended on its full implementation, and he urged all sides to honour their commitments to immediately cease all violent acts and refrain from further provocations.

He noted that the agreement would not have been possible without the commitment of Mr. Saleh, the Vice-President, the General People’s Congress and the National Council for the Peaceful Revolutionary Forces.

He also thanked the Gulf Cooperation Council (GCC), the European Union and Security Council members for their efforts to bring about a peaceful transition.

Speaking to reporters at UN Headquarters in New York, Secretary-General Ban Ki-moon said he was encouraged by the agreement and pledged the UN’s assistance to ensure the pact is fully implemented.

“I will do my best to mobilize the necessary resources and support so that peace and stability and democratic order will be restored in Yemen,” he said.

In a statement issued later by his spokesperson, Mr. Ban emphasized the “great suffering and hardship” endured by Yemenis and urged all sides to honour their commitments under the agreement.

“This will be essential for restoring peace and stability and promoting recovery,” the statement noted. 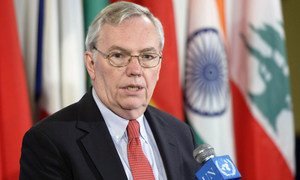 Amid rising violence in Yemen, Security Council calls for speedy transition of power

Condemning human rights violations and the excessive use of force by the Yemeni authorities against peaceful protesters as well as violence by other groups, the Security Council today called on all sides to quickly implement a regional plan for an orderly transition of power.