22 November 2011
The second-in-command of the Khmer Rouge today told a United Nations-backed war crimes tribunal, where he is facing trial for genocide and other charges, that he had been trying to protect Cambodia from aggression when the notorious regime ruled the country in the late 1970s.

“I devoted myself to fight for my country,” said Nuon Chea, the former deputy secretary of the Communist Party of Kampuchea and “Brother Number Two” in the Khmer Rouge, which ruled Cambodia from 1975 and 1979 and is thought responsible for the deaths of nearly two million citizens.

“I had to leave my family behind to liberate my motherland from colonialism and aggression, and oppression by the thieves who wished to steal our land and wipe Cambodia off the face of the Earth.”

He added that whatever the accusations before him, they were “not true.”

Speaking in Phnom Penh before the Extraordinary Chambers in the Courts of Cambodia (ECCC), where he is facing trial along with Ieng Sary and Khieu Samphan, two other senior Khmer Rouge figures, Mr. Nuon was making his opening statement, a day after prosecutors outlined their case against him.

Mr. Nuon has been indicted by the ECCC – a mixed court set up under a 2003 agreement between the UN and the Cambodian Government – on charges of genocide, crimes against humanity and grave breaches of the 1949 Geneva Convention.

Prosecutors have alleged that Mr. Nuon, Mr. Ieng and Mr. Khieu carried out a series of crimes, including killings, enslavement, the use of violence to “smash” enemies, forced marriage, religious persecution and the forced movements of people from urban to rural areas.

Andrew Cayley, an international prosecutor, said “these crimes were the result of an organized plan developed by the accused and other leaders and systematically implemented by them. These men are common murderers… They removed all emotions of people. No one in this country was unaffected by these evil men.”

Opening statements will continue this week, with the hearing of evidence and examination of witnesses scheduled to begin on 5 December. 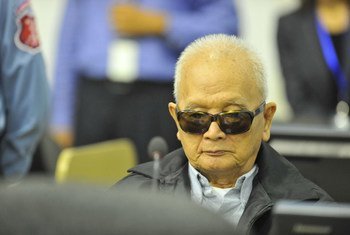 21 November 2011
The United Nations human rights chief today welcomed the opening of the genocide trial of three former senior Khmer Rouge leaders in Cambodia, while stressing the need for vigilance to ensure that victims’ rights are respected.