A Central African rebel group’s agreement to release an estimated 1,500 child soldiers is a sign that momentum is gathering in the strife-torn country for all armed groups to soon end the recruitment and use of under-age fighters, a senior United Nations envoy said today.

Radhika Coomaraswamy, the Secretary-General’s Special Representative for Children and Armed Conflict, said up to six groups in the Central African Republic (CAR) could release the child soldiers within their ranks over the next year.

Speaking after the Convention of Patriots for Justice and Peace (CPJP) yesterday signed an action plan to release its child soldiers, Ms. Coomaraswamy noted the deal followed a similar recent agreement involving the Popular Army for the Restoration of the Republic and Democracy (known as APRD).

“Additionally, the Union des Forces Démocratiques pour la Rassemblement (UFDR) committed to United Nations verification of the presence of children in their ranks,” she said.

Ms. Coomaraswamy, who witnessed yesterday’s signing ceremony in N’Dele, a north-eastern Central African town, told the UN News Centre by telephone that she was optimistic that the deal would be fully implemented.

“The fact that they have already drawn up lists” of child soldiers to be released is a sign that the CPJP is prepared to carry out its obligations, she said.

The deal was also signed by Margaret Vogt, the head of the UN Integrated Peacebuilding Office in the Central African Republic (BINUCA) and Tanya Chapuisat, the representative of the UN Children’s Fund (UNICEF).

Ms. Vogt said the critical task was to now ensure that child soldiers are separated and reintegrated into civilian life.

Echoing those remarks, Ms. Chapuisat stressed the importance of rehabilitation and reintegration programmes for former child soldiers, and called for an injection of new funds to achieve this.

Ms. Coomaraswamy said the recent deals were the result of a combination of mounting international pressure on the armed groups and a growing awareness among the groups of the need to end the practice.

But she warned that the Lord’s Resistance Army (LRA), the Ugandan rebel force whose members have caused havoc in parts of the CAR, was still active and harming local communities.

“The LRA is a brutal force and the international community must stand together to provide security for these communities and to ensure that child survivors of the LRA are given proper care and support,” she said. 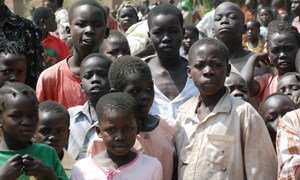 The Security Council today strongly condemned ongoing attacks carried out by the rebel Lord’s Resistance Army (LRA) across Central Africa and demanded an immediate end to the atrocities.