The United Nations Environmental Programme (UNEP) called today for the international community to step up its efforts to protect the pathways and networks of migratory species, which are being threatened by human activity, endangering the future of wildlife hubs.

The United Nations Environmental Programme (UNEP) called today for the international community to step up its efforts to protect the pathways and networks of migratory species, which are being threatened by human activity, endangering the future of wildlife hubs.

According to UNEP, if action is not taken immediately, by 2050 there will be a loss of abundance and species of wildlife equivalent to eradicating all fauna and flora in an area roughly the size of the United States or China.

To mobilize a response to this issue, representatives from some 100 governments are meeting at a UN conference in Bergen, Norway, organized by the Convention on the Conservation of Migratory Species of Wild Animals (CMS) of the UNEP.

The six-day conference taking place this week is putting particular focus on the importance of ecological networks as an efficient instrument to protect a wide range of migratory animals.

“For all the frequent travellers of the animal world, ecological networks are essential for their migration and survival. International cooperation is crucial to manage these large transboundary networks,” said CMS Executive Secretary, Elizabeth Maruma Mrema.

“The commitment of all countries is needed, so that future generations can still marvel at and benefit from these nomads connecting our planet.”

UNEP also launched a report at the conference on how to protect migratory networks, highlighting stories where international collaboration has led to positive outcomes. For example, in the Pacific island country of Palau, sharks that have roamed the oceans for over 400 million years were becoming endangered due to the demand for the fins for soup, but new measures helped not only to protect the species but also stimulate the local economy.

“Two years ago, Palau became the first country to declare its coastal waters a shark sanctuary –scientists now estimate that shark diving tours are generating around eight per cent of the country’s gross domestic product (GDP) and that a single shark generates revenues from ecotourism amounting to 1.9 million over its lifetime,” said Achim Steiner, UNEP Executive Director.

Other successful examples include a 10-year programme to restore and conserve seven million hectares of wetland in China, Iran, Kazakhstan and Russia, which has boosted the prospects of survival for the Siberian crane and improved drinking water supplies, and a transboundary enforcement measure to protect the population of mountain gorillas on the borders of the Democratic Republic of the Congo (DRC), Rwanda and Uganda.

In spite of these successes, UNEP expressed its concern about large countries which account for almost 36 per cent of the global land area that are still not parties to the Convention, posing challenges for protecting migratory species worldwide.

In addition, practices such as poaching are on the rise, particularly in the grasslands and savannahs of Africa and Central Asia.

“Organized poaching on animals such as rhinos, elephants and antelopes is increasing rapidly in Asia and Africa and support is desperately needed to address this at a wider international scale,” said Christian Nellemann, of UNEP’s GRID-Arendal centre in Norway. 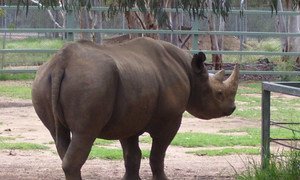 The head of the United Nations-backed convention on endangered species called today for the stepping up of efforts by countries and international organizations to combat the illegal trade in rhino horn, after a leading conservation group declared Africa’s Western Black Rhinoceros officially extinct.