Vincent van Zeijst
Headquarters of the International Criminal Court in The Hague.
19 November 2011

The President of the Assembly of State Parties to the Rome Statute of the International Criminal Court (ICC) today welcomed the capture of one of the sons of former Libyan leader Muammar al-Qadhafi against whom the tribunal has a warrant of arrest.

Saif al-Islam Qadhafi was reportedly seized near the southern town of Obari by forces of Libya''s interim authority, the National Transitional Council (NTC).

“By arresting Saif al-Islam Qadhafi, the Libyan authorities have taken a major step towards ensuring accountability and due process rights and towards fulfilling their obligations under international law,” said Christian Wenaweser, the President of State Parties to the 1998 Rome Statute that established the ICC.

He commended Libyan authorities for their cooperation with the Court, even in the face of difficult conditions.

“I look forward to the continued cooperation of the Libyan authorities with the International Criminal Court, pursuant to their obligation under Security Council resolution 1970,” said Mr. Wenaweser in a statement.

Under the Rome Statute, Libya retained the primary jurisdiction over all crimes committed on its territory, he said.

“It must be ensured that Saif al-Islam is tried in a court of law and in accordance with international standards. Should the Libyan authorities wish to try him in Libya, they can make the case before the Court that their national judicial system is willing and able to do so in an independent and impartial manner,” said Mr. Wenaweser.

He said he was heartened by reports that the forces that captured Saif al-Islam intended to treat him as a prisoner of war. He noted that international law generally, and the Rome Statute specifically, imposed an obligation to treat him according to established international standards.

In June the ICC issued arrest warrants for Colonel Muammar al-Qadhafi, his son Saif al-Islam and the country''s former intelligence chief, Abdullah Al Sanousi for their roles in attacks against protesters, many of whom were killed when opposition forces rose up against the regime.

Muammar al-Qadhafi was killed in October in his hometown of Sirte during the final days of the eight-month-long conflict. 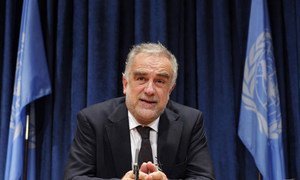 The Prosecutor of the International Criminal Court (ICC) called on countries today to “do all they can” to prevent Muammar al-Qadhafi’s son from leaving Libya amid reports that a group of mercenaries are attempting to facilitate his escape.