Mr. Yudhoyono is the first person to be designated as a global champion by the UN International Strategy for Disaster Risk Reduction (UNISDR) and was recognized for making disaster risk reduction a national priority following the catastrophic Indian Ocean tsunami of 2004.

“Within weeks of taking office, President Susilo Bambang Yudhoyono was confronted with one of the worst disasters in his country''s history,” said Margareta Wahlström, Special Representative of the Secretary-General for Disaster Risk Reduction.

“He rose to the occasion and set about transforming risk management in Indonesia through a series of far-reaching measures which will be an enduring part of his political legacy.

“Against the backdrop of the loss of lives and livelihoods which we have seen across the region this year as a result of floods and earthquakes, Indonesia is an example of how to align disaster management with other development priorities in order to strengthen the resilience of communities and individuals,” she said.

Disaster response, post-disaster recovery and disaster risk reduction are now given equal importance and the country is better prepared for disasters, she added.

As part of his new role as Global Champion, Mr. Yudhoyono will continue to advocate and promote the importance of disaster risk reduction particularly in school and hospital safety, according to UNISDR.

At an earlier meeting between Mr. Ban and Mr. Yudhoyono, the UN chief welcomed Indonesia''s exemplary progress on democratic governance.

They also discussed regional and other issues of common interest, including the dispute between Cambodia and Thailand, the situation in Myanmar and Timor-Leste, as well as climate change and the Millennium Development Goals.

The Secretary-General expressed his appreciation of Indonesia''s important contributions to the United Nations, particularly with regard to peacekeeping operations. 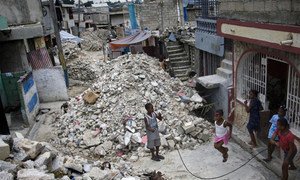