The United Nations independent expert on access to water and sanitation as a human right today urged States to allocate more resources to improving sanitation and promote efficient use of existing hygiene facilities, stressing that people are entitled to decent toilets.

The United Nations independent expert on access to water and sanitation as a human right today urged States to allocate more resources to improving sanitation and promote efficient use of existing hygiene facilities, stressing that people are entitled to decent toilets.

“Lack of sanitation implies the loss of millions of school and work days as well as enormous health costs,” said Catarina de Albuquerque, the UN Special Rapporteur on the Human Right to Safe Drinking Water and Sanitation, in a statement to mark the World Toilet Day, which is observed on 19 November each year.

“The sanitation sector is in desperate need of more financial resources, in both developing and developed countries, but investing in sanitation is good business and a smart deal,” noted Ms. de Albuquerque, stressing that for every dollar spent on sanitation facilities, there is an average return of $9 in averted costs and productivity gains.

She stated that developed countries were only able to improve life expectancy and reduce child mortality when governments began making substantial investments in sanitation.

“Especially in a period of economic crisis, it is fundamental to invest in crucial sectors that have a multiplier effect, spend the available resources more efficiently and ensure better targeting so as to prioritize the most excluded and marginalized,” she emphasized.

In her recent report to the General Assembly entitled ''Financing for the Realization of the Rights to Water and Sanitation,'' Ms. de Albuquerque underscored the need to increase and restructure financing in the water and sanitation to meet human rights requirements.

Universal access to sanitation by 2015 would require over $14.5 billion annually, according to a 2006 study by the UN World Health Organization (WHO) and the UN Development Programme (UNDP).

“This seems a huge sum,” Ms. de Albuquerque pointed out. “Yet, put in perspective, it is less than what people in rich countries spend on bottled water each year.”

According to last year''s global annual assessment of sanitation and drinking by UN agencies, 95 per cent of countries reported that current funding was not enough to provide access to half of those without toilets.

“Additional resources are needed for the realization of the right to sanitation, but a lot more could be achieved with the funds already allocated,” said the independent expert. “Money is being spent in the wrong places. We need better targeting of resources aligned with human rights requirements.” 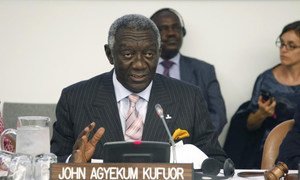 The former Ghanaian president John Agyekum Kufuor will head the United Nations-backed partnership known as Sanitation and Water for All, which works to achieve universal and sustainable access to decent sanitation and drinking water.