The United Nations Environment Programme (UNEP) and China’s academy of sciences today launched a joint programme designed to promote proper management of ecosystems in developing countries, with a special focus on Africa.

The United Nations Environment Programme (UNEP) and China’s academy of sciences today launched a joint programme designed to promote proper management of ecosystems in developing countries, with a special focus on Africa.

The International Ecosystem Management Partnership (IEMP), an initiative of the UNEP and the Chinese Academy of Sciences (CAS), will have the core mandate of synthesizing the science of ecosystem management for government decision-makers through monitoring, capacity-building and policy.

With ecosystems increasingly under threat as a result of a growing population, high rates of deforestation and transformation into agricultural and pasturelands, the role of ecosystem management has become more important than ever, according to UNEP.

The IEMP, based in China, is UNEP’s first South-South cooperation programme to promote sustainable development through sharing best practices and technology among developing countries.

The scope of the partnership’s work covers both terrestrial and marine ecosystems, and its clients will include national governments, intergovernmental bodies and programmes, as well as development agencies and the science community.

Under-Secretary-General for Economic and Social Affairs and Secretary General of the UN Conference on Sustainable Development (Rio+20), Sha Zukang, stressed the critical role of ecosystems and the challenges of degradation in the context of population growth and increasing inequality.

“Ecosystems are the foundation of human lives and livelihoods,” he said. “The future of human civilization and sustainable development depends on sound, healthy and resilient ecosystems. For too long, humanity has ignored this fundamental truth at its own peril,” Mr. Sha added.

UNEP Executive Director Achim Steiner reaffirmed the agency’s commitment to promoting ecosystem management as a cornerstone of the transition to the green economy in developing countries.

Jian Liu, the IEMP Director, stressed that sustainable management of ecosystems and biodiversity is a critical path to the next civilization, which he called the “ecological civilization,” saying it constituted an integral part of the “fourth industrialization” – the development of the green economy. 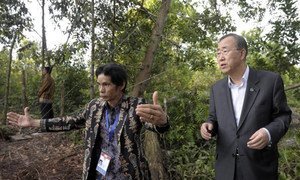